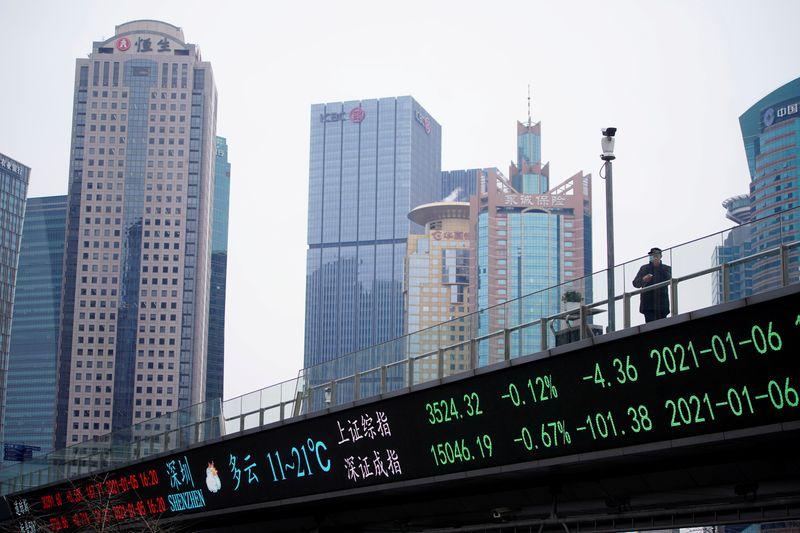 NEW YORK (Reuters) - A gauge of global equity markets snapped a three-day losing streak to inch higher on Friday as investors sold technology shares and rotated into economically sensitive cyclical stocks in anticipation the U.S. economy will boom on pent-up demand once the coronavirus pandemic is subdued.

The MSCI's global stock index was up 0.16% at 679.74, after losing ground for three consecutive sessions.

European shares edged higher on Friday as an upbeat earnings report from Hermes boosted confidence in a broader economic recovery. The pan-European STOXX 600 index closed up 0.53%.

U.S. Treasury yields on the longer end of the curve rose to new one-year highs on Friday as Congress was poised to act on a massive coronavirus relief package, while the yield on 30-year inflation-protected securities (TIPS) turned positive for the first time since June.

The 30-year TIPS yield, which had been in negative territory since June, surpassed the 0% mark, rising after a weak auction of $9 billion of the securities on Thursday. It was last at 0.029%.

Unusually cold weather in Texas and the Plains states curtailed up to 4 million barrels per day (bpd) of crude oil production and 21 billion cubic feet of natural gas, analysts estimated.

Copper jumped to its highest in more than nine years on Friday and towards a third straight weekly gain as tight supplies and bullish sentiment toward base metals continued after the Chinese New Year.

The dollar lost ground on Friday, extending Thursday's decline as improved risk appetite sapped demand for the safe-haven currency and drew buyers to riskier, higher-yielding currencies. The dollar index was off 0.223%.

Bitcoin rose to yet another record high on Friday, hitting a market capitalization of $1 trillion, blithely shrugging off analyst warnings that it is an "economic side show" and a poor hedge against a fall in stock prices.