By April Joyner NEW YORK (Reuters) - U.S. and European shares advanced on Thursday as China struck a hopeful tone on trade relations with the United States and as Italy appeared close to forming a new government and resolving its political crisis 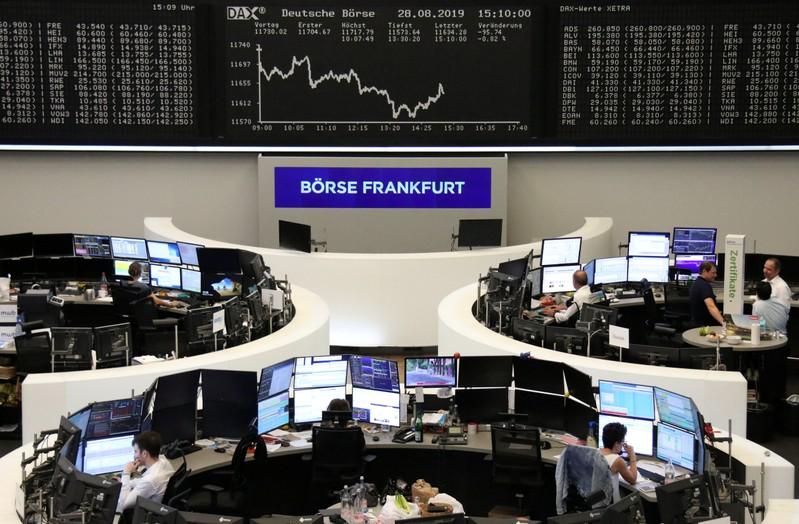 NEW YORK (Reuters) - U.S. and European shares advanced on Thursday as China struck a hopeful tone on trade relations with the United States and as Italy appeared close to forming a new government and resolving its political crisis.

Wall Street stocks jumped more than 1% after China's commerce ministry said Beijing and Washington were discussing the next round of face-to-face talks scheduled for September. The comments spurred hopes for progress in the talks and boosted the Chinese yuan, which snapped a 10-day losing streak.

Stocks have been whipsawed over the past few weeks as trade rhetoric between the United States and China has ranged from combative to conciliatory. On Friday, China unveiled retaliatory tariffs on $75 billion of U.S. goods, and U.S. President Donald Trump said he would tack an additional 5% duty onto $550 billion of Chinese goods.

"If there's promise that they might be able to negotiate and that tariffs will not be implemented right away, that's good news," said Paul Nolte, portfolio manager at Kingsview Asset Management in Chicago.

The coalition is a step toward resolving a three-week political crisis triggered after League leader Matteo Salvini pulled his hard-right party out of its governing alliance with 5-Star. Italian stocks <.FTMIB> rose nearly 2% and the country's government bonds also rallied, with yields on 10-year bonds hitting a record low.

The dollar index <.DXY>, tracking it against six major currencies, rose 0.29%, while the euro

The Japanese yen weakened 0.48% versus the greenback at 106.64 per dollar. Sterling

In offshore trading, the Chinese yuan

U.S. crude extended its gains from Wednesday on data showing a sharp fall in U.S. inventories, with the approach of Hurricane Dorian toward Florida also raising concerns that offshore producers may slow output if the storm passes into the Gulf of Mexico.