By Rodrigo Campos NEW YORK (Reuters) - Stocks rose across the globe on Monday as investors cheered news that more countries and U.S. states were looking to ease lockdowns and the Bank of Japan expanded its stimulus program, while the price of oil continued to crumble as storage runs out. U.S 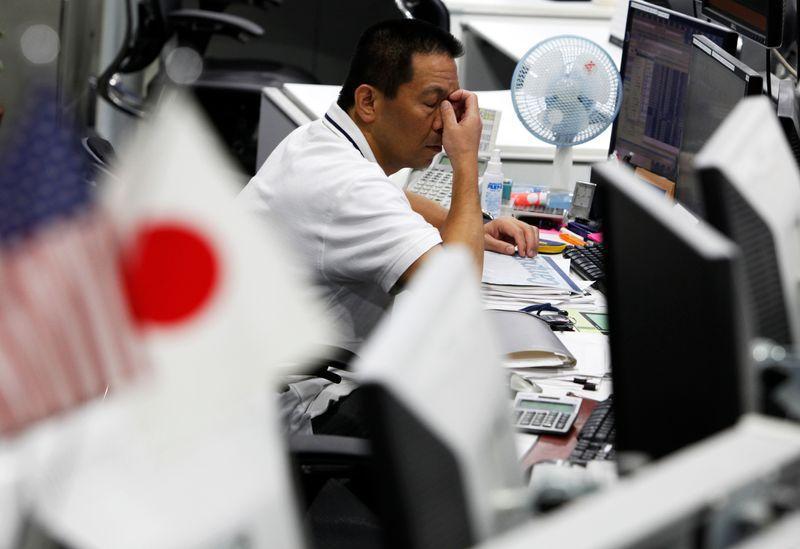 NEW YORK (Reuters) - Stocks rose across the globe on Monday as investors cheered news that more countries and U.S. states were looking to ease lockdowns and the Bank of Japan expanded its stimulus program, while the price of oil continued to crumble as storage runs out.

U.S. energy stocks <.SPNY> outperformed the overall market with a 2.1% gain even as U.S. crude prices fell more than 20%.

The U.S. dollar slipped as risk-prone traders cheered lockdown news even as health experts warned that not enough coronavirus testing was in place in the United States. From Italy to New Zealand, governments announced the easing of restrictions, while Britain said it was too early to relax them there. New York state will not reopen for weeks, at the soonest.

The Bank of Japan kicked off a week of central bank meetings by pledging to buy unlimited amounts of government bonds, continuing a trend of historic stimulus announcements to offset the economic effects of the COVID-19 pandemic.

The U.S. Federal Reserve and the European Central Bank meet later in the week, with the ECB expected to increase the size of its bond buying program.

The U.S. state of Georgia began letting residents dine at restaurants and watch movies at theaters as more states, from Minnesota to Mississippi, took steps to ease coronavirus restrictions even though health experts warned it may be too early.

"If we start reopening tomorrow and there's no big second wave of infections, I still think it's 6 to 12 months at least until everything is back to normal," said Oliver Pursche, independent asset adviser in New York.

"It's much easier to hit 'stop' on an economy than it is to press 'start,'" he said.

Although trillions of dollars in stimulus have helped the S&P 500 recover nearly 30% from its March lows, some analysts say more gains may be capped as the economic damage grows, unless there is progress on treatments for the disease.

"There are so many things that can go wrong in the next six months," said Marc Chaikin, founder of Chaikin Analytics in Philadelphia, adding that "history suggests that bear markets end with a whimper and not a bang."

Oil prices weakened sharply on continued concern about oversupply and a lack of storage space. The front-month contract was trading at lower-than-usual volumes as traders moved to later months in futures contracts.

"The market is very concerned about a repeat of negative pricing as the Cushing storage and delivery hub saturates," Harry Tchilinguirian, global oil strategist at BNP Paribas in London, told the Reuters Global Oil Forum.

"The shift of open interest away from June will have negative consequences for the liquidity of the contract, potentially leading to greater volatility in its price," he said.

The U.S. dollar dropped as the broader upbeat mood encouraged investors to move into other currencies.

The Japanese yen strengthened 0.26% versus the greenback at 107.30 per dollar, while sterling

Bucking the trend, the Brazilian real

The United States and European Union both release first-quarter economic growth numbers this week, while the influential U.S. ISM manufacturing survey is also due.