The equity benchmark BSE Sensex sank over 300 points in early session on Wednesday, dragged by losses in banking, IT and auto stocks amid negative global cues and foreign fund outflow.

#CNBCTV18Market | 2 metal stocks and 2 financials find themselves among the top losers in the opening hour of trade pic.twitter.com/efIP1iuGvW

Among sectors, except IT all other indices are trading in the red. Midcap and smallcap indices are also trading with marginal loss.

On the other hand, PowerGrid, RIL, NTPC, TCS, HCL Tech, Tech Mahindra and Bharti Airtel rose up to 2 percent.

#CNBCTV18Market | Here are the top gainers in the opening hour of trade pic.twitter.com/7CoojpSjMA

Asian stocks fell on Wednesday after the US lawmakers called for an impeachment inquiry into President Donald Trump, increasing the prospects of prolonged political uncertainty in the world’s largest economy. 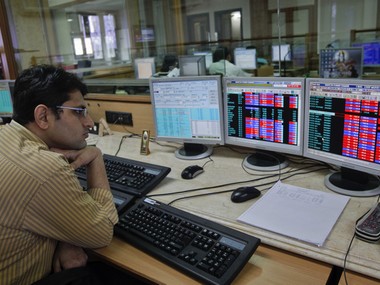 Top US Democrat Nancy Pelosi's announced the opening of a formal impeachment inquiry into President Donald Trump, saying he betrayed his oath of office by seeking help from a foreign power to hurt his Democratic rival Joe Biden.

Elsewhere in Asia, bourses in Shanghai, Hong Kong, Tokyo and Seoul were trading significantly lower in their respective late morning sessions after US President Donald Trump put China on notice at the United Nations, declaring that the time of trade "abuses" by Beijing was "over" and calling on the country to protect Hong Kong's "democratic ways of life."

Global market sentiment also turned negative following top US Democrat Nancy Pelosi's announcement of the opening of a formal impeachment inquiry into President Donald Trump, saying he betrayed his oath of office by seeking help from a foreign power to hurt his Democratic rival Joe Biden.

Shares on Wall Street ended in the red on Tuesday. The rupee, meanwhile, depreciated 7 paise against its previous close to 71.08 in early session.

The dollar nursed losses against most major currencies as the impeachment inquiry sets the stage for a fierce battle between Democrats and Trump’s Republican Party over whether the president sought foreign influence to smear a political rival, Reuters said.

Sterling remained broadly supported in Asia after the UK Supreme Court ruled Prime Minister Boris Johnson’s decision to shut down parliament was unlawful, a move that could thwart his plan to pull Britain out of European Union next month with or without a deal.

“There are a lot of factors out there that could potentially hurt market sentiment,” said Tsutomu Soma, general manager of fixed income business solutions at SBI Securities in Tokyo.

“However, some hedge funds have to close their books at the end of the month, so it may be difficult for the market to move.”