SAINT-FONS, France (Reuters) - A French company is collecting fish skins that would otherwise wind up in restaurant trash cans, turning them into leather for use in watch straps and wallets, and pitching them at the high-end luxury market. Turning fish skin into leather is an age-old craft 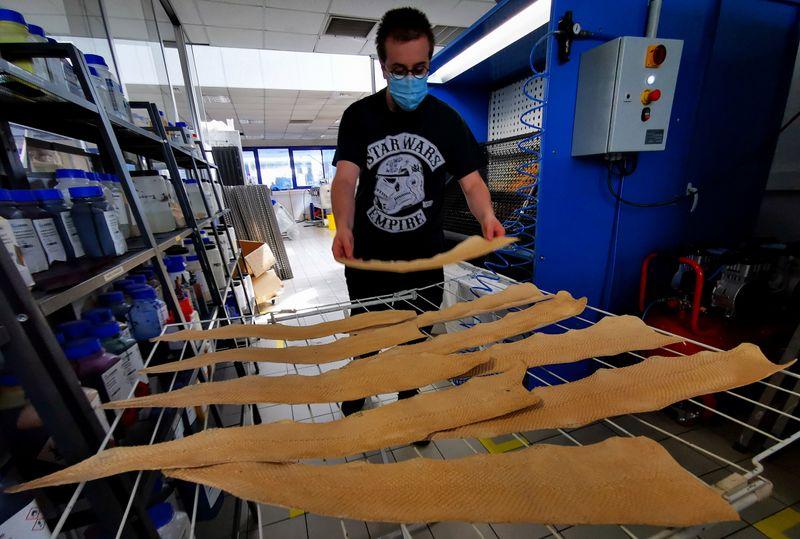 SAINT-FONS, France (Reuters) - A French company is collecting fish skins that would otherwise wind up in restaurant trash cans, turning them into leather for use in watch straps and wallets, and pitching them at the high-end luxury market.

Turning fish skin into leather is an age-old craft. It is experiencing a revival -- driven by its environmentally-friendly credentials -- but has yet to break into the rarefied end of the fashion industry.

Three friends, who met when studying chemical engineering near Paris and taught themselves the tanning process from scratch, are trying to change that.

"Salmon skin has a suppleness, and a finesse, it's less than half a millimetre thick, but with a resistance which is nearly equivalent to cow leather," said Benjamin Malatrait, one of the three friends, who co-founded a company called Ictyos.

"It has a grain which is more marked, with the scales that are a bit reminiscent of lizard," he said at his firm's workshop near the French city of Lyon. "Visually its quite exotic."

Their firm has been given a six-month stint inside a startup incubator run by Paris-based global fashion giant LVMH, owner of brands such as Louis Vuitton and Christian Dior. The idea is that the incubator's graduates land deals with LVMH fashion houses.

Malatrait said Ictyos is working with 250 clients -- big brands and artisan producers -- who are testing the products for use in watch straps, bags, and clothes.