By Rania El Gamal, Alex Lawler and Ahmad Ghaddar DUBAI/MOSCOW/LONDON (Reuters) - Saudi Arabia called on fellow OPEC+ members on Tuesday to be flexible in responding to oil market needs as it builds the case for a tighter oil production policy in 2021 to tackle weaker demand amid a new wave of the coronavirus pandemic. 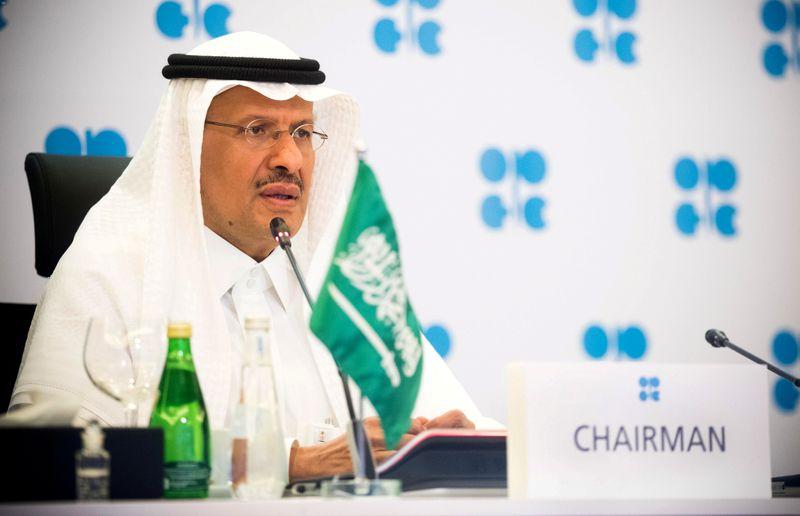 DUBAI/MOSCOW/LONDON (Reuters) - Saudi Arabia called on fellow OPEC+ members on Tuesday to be flexible in responding to oil market needs as it builds the case for a tighter oil production policy in 2021 to tackle weaker demand amid a new wave of the coronavirus pandemic.

OPEC+, which groups the Organization of the Petroleum Exporting Countries, Russia and others, is considering delaying a plan to boost output by 2 million barrels per day (bpd), or 2% of global demand, in January to support the market.

"We as a group do not want to give the markets any excuse to react negatively," Saudi Energy Minister Prince Abdulaziz bin Salman said at a virtual meeting of an OPEC+ panel, the Joint Ministerial Monitoring Committee (JMMC).

The JMMC, which can recommend policy to the broader group, made no formal recommendations on Tuesday, three OPEC+ sources said.

Saudi Arabia, the world's biggest oil exporter, has indicated it wants a tighter policy in 2021 to draw down inventories still bulging since demand tumbled this year.

But other big producers, such as Iraq, have failed to deliver fully on promised cuts and have signalled they want some leeway to produce more oil next year.

"The markets will not be kind to those who do not stick to agreements. This is why we must be prepared to act according to the requirements of the market. I recently said we must be ready to tweak the terms of our agreement if need be," the Saudi minister said.

OPEC+, which holds a full ministerial meeting on Nov. 30 and Dec. 1 to discuss policy, agreed record oil cuts earlier this year as global lockdown measures aimed at preventing the virus from spreading drove down fuel demand.

Russian Deputy Prime Minister Alexander Novak said Russia would stick to its obligations under the OPEC+ deal and said the market had reached stability thanks to joint efforts. He did not say if Moscow was ready to extend existing cuts.

An option gaining support among OPEC+ nations is to keep the existing cuts of 7.7 million bpd for a further three to six months, OPEC+ sources said, rather than tapering the reduction to 5.7 million bpd in January.

Oil slipped further below $44 a barrel on Tuesday, although hopes for a COVID-19 vaccine and expectations of further action by OPEC+ are lending support. [O/R]