By April Joyner NEW YORK (Reuters) - The benchmark S&P 500 index ended little changed on Monday after oscillating between positive and negative territory throughout the session after Citigroup Inc kicked off the earnings season with a mixed quarterly report. The bank reported a better-than-expected profit but also a decline in its net interest margin. The fall in net interest margin triggered a fall in shares of other banks on concerns that it would presage lower profits across the industry as interest rates have dropped 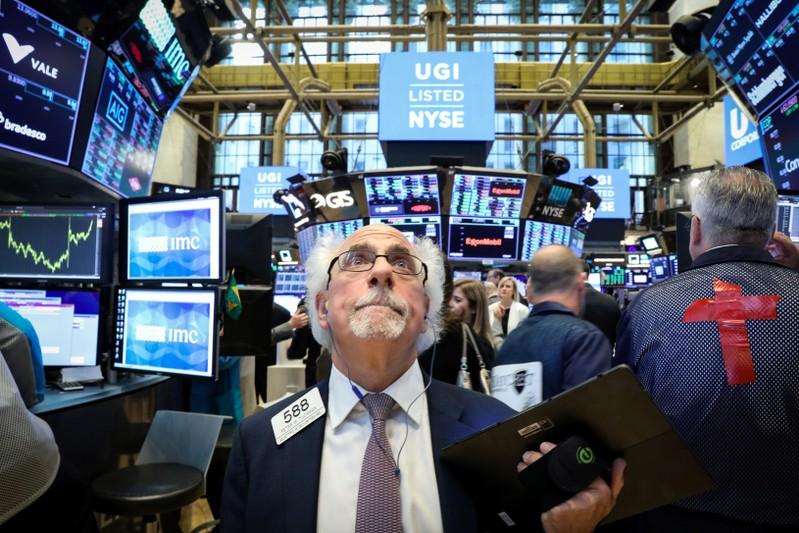 The bank reported a better-than-expected profit but also a decline in its net interest margin. The fall in net interest margin triggered a fall in shares of other banks on concerns that it would presage lower profits across the industry as interest rates have dropped.

Gains in technology <.SPLRCT> and healthcare <.SPXHC> shares offset the losses in financial shares, however. Those sectors helped the Nasdaq edge higher to notch its fourth consecutive record closing high.

Second-quarter earnings start in earnest this week, and analysts expect S&P 500 companies to report a 0.3% fall in profit, which would be the first quarterly drop in three years, according to Refinitiv IBES data.

"It's definitely a wait-and-see environment," Pursche said. "Citi was looked at as slightly disappointing."

Yet solid earnings could give U.S. stocks a further boost, said Lamar Villere, portfolio manager of the Villere Balanced Fund in New Orleans.

"We think earnings are going to be generally positive this season," he said. "We've been on a tear this year, but we still have some room to go."

Advancing issues outnumbered declining ones on the New York Stock Exchange by a 1.04-to-1 ratio; on the Nasdaq, a 1.06-to-1 ratio favored decliners.

Volume on U.S. exchanges was 5.39 billion shares, compared with the 6.69-billion-share average for the full session over the last 20 trading days.