LISBON (Reuters) - An Irish court granted an injunction on Wednesday to prevent Ryanair's Dublin-based pilots from going on strike, but the airline suffered a setback when a London court just hours later rejected a similar application for its British pilots. 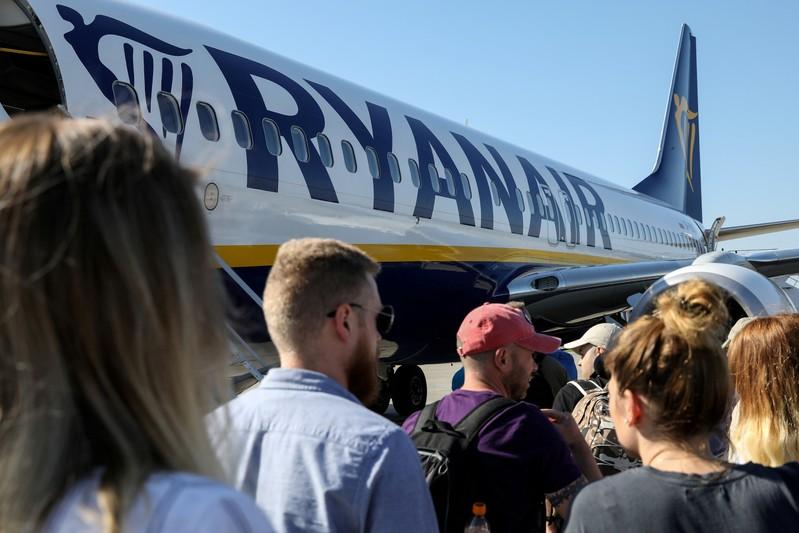 LISBON (Reuters) - An Irish court granted an injunction on Wednesday to prevent Ryanair's Dublin-based pilots from going on strike, but the airline suffered a setback when a London court just hours later rejected a similar application for its British pilots.

Ryanair is battling to contain a wave of unrest among its workers around a year after strikes over pay and conditions forced the Irish airline to cancel hundreds of flights.

The company welcomed the Irish High Court ruling, saying all flights scheduled to depart on Aug. 22 and 23 from Irish airports would operate as normal.

But the airline said it regretted the decision by less than 30% of its UK pilots to strike on Thursday and Friday in "support of unreasonable pay demands."

After a ruling at the High Court in London, the general secretary of British pilots union BALPA, Brian Strutton, told Reuters that Ryanair could still avoid the planned strike by British pilots this week if it agrees to a new framework for talks.

"We've sent a proposal to the company with a suggested framework to take talks forward. If they agree to it, we've offered to call the strike off," said Strutton.

"Even at this late stage, we're doing our best to avoid disruption. The ball is in their court"

Separately, a five-day strike by Ryanair's cabin crew in Portugal is underway but disruption to passengers appeared minimal, with no cancelled flights or major delays.

In a statement released on Wednesday afternoon, Ryanair said more staff than needed showed up to work at Portuguese airports on Wednesday morning and there would be no significant disruption to flights to and from the country during the rest of the day.

Portugal's SNPVAC cabin crew trade union met with the Portuguese minister of infrastructure and housing on Wednesday to discuss the labour situation, including the impact of the possible closure of Ryanair's base in Faro.

"The government has mechanisms to penalise companies that do not follow the law and Ryanair does everything to escape it (the law)," SNPVAC director Fernando Gandra told Reuters.

SNPVAC president Luciana Passos said 70%-80% of crew members were currently on strike, though there were no major delays or cancellations at Lisbon, Porto and Faro airports,

"This (strike) is an attempt to once again draw attention to the problems faced by Ryanair crew members, to the way Ryanair operates in Portugal and the total impunity with which Ryanair operates," Passos said.

Ryanair's management say significant progress has been made since last year's strikes, with collective labour agreements concluded with a number of pilot unions throughout Europe.

But SNPVAC said Ryanair had refused to comply with a protocol signed last November, which it said included holiday pay, 22 days of annual leave per year and full compliance with Portuguese parental law.

At the height of the summer season, Portugal's government set out a minimum service for Ryanair and its staff to deliver, including a daily round trip between Lisbon and London.

SNPVAC said the minimum service order was "abusive" and undermined the right to strike.

Belgium's CNE and ACV PULS unions told members on Tuesday not to comply with a Ryanair request to staff flights affected by the Portuguese action.

Spain's STICPLA union also sent a letter to members, advising they were not obliged to "answer company calls" if they were in their rest time, on days off or on holiday.

Unions representing cabin crew in Spain said their plans for 10 days of strikes next month still stood after more than seven hours of mediated talks with the airline ended on Tuesday without agreement.