Rupee slides 10 paise to over 1-month low of 71.64 amid heavy selling in domestic equities

Mumbai: The rupee on Thursday declined by 10 paise to settle at a more than one-month low of 71.64 against the US dollar amid heavy selling in domestic equities and strengthening of the American currency in the overseas market.

The death toll from the coronavirus epidemic in China has climbed to 2,118, while the overall confirmed cases increased to 74,576, Chinese officials said on Thursday.

At the interbank foreign exchange market, the local currency opened at 71.75. During the day, it lost ground and touched a low of 71.80 and finally settled 10 paise lower at 71.64 against the US currency, a level not seen since 8 January.

The rupee had settled at 71.54 against the US dollar on Tuesday. Forex market was shut on February 19, on account of Chhatrapati Shivaji Maharaj Jayanti. 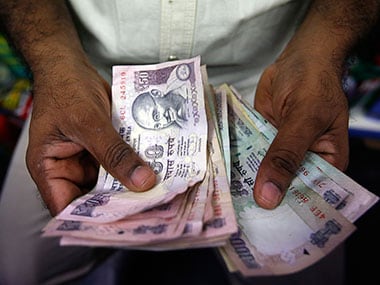 On a weekly basis, the rupee lost 33 paise.

"Despite a lackluster week, we saw an appreciation in USD/INR spot tracking some uncertainty over coronavirus along with sharp surge in dollar index and crude oil prices," said Rahul Gupta, Head of Research- Currency, Emkay Global Financial Services.

Meanwhile, the dollar index, which gauges the greenback's strength against a basket of six currencies, rose 0.15 percent to 99.85.

The 10-year Indian government bond yield was at 6.42 percent.

Foreign institutional investors sold equities worth Rs 190.66 crore on a net basis on Wednesday, according to provisional exchange data.