Reliance Industries AGM: Here's how the numbers stack up for Mukesh Ambani's oil to telecom businesses

One of the highlights of the 40th Annual General Meeting of Reliance Industries was Chairman Mukesh Ambani's number crunching that effectively showed the span of the company's success arc.

Here are the numbers:

5 lakh crore: Market capitalization has multiplied from ten crores to five lakh crores. An exponential growth of fifty thousand times and a compounded growth rate in excess of 32 percent. 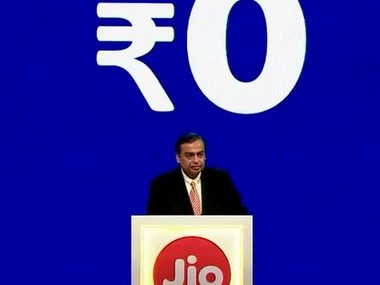 40: Reliance@40 – Four Decades of Value Creation. This year marks the 40th anniversary since our IPO

12: Will ensure that India's 4G coverage will be more than its 2G coverage in the next 12 months

153: Introduces an unlimited data plan for Jio Phone users at Rs 153 per month

120: In just 6 months of Jio's launch, data consumption in India went from 20 crore GB to 120 crore GB per month and has been multiplying ever since

125: Customers  are consuming over 125 crore GB of data every month, including 165 crore hours of high-speed video every month, making Jio the largest mobile video network

155: Before Jio's launch, India was 155th in the world in mobile broadband penetration.

309: Most customers have recharged on Jio's Rs 309 or higher plans

78: There are 78 crore mobile phones in India and of these, more than 50 crore feature phone users who have been left out of the digital revolution