By Julia Payne and Dmitry Zhdannikov LONDON (Reuters) - Saudi Arabia's ability to avert a global oil supply crunch will only become clear in a few weeks, because for now its crude held in storage can fill the gap and mask the scale of damage to its facilities, traders and analysts say. Riyadh says production will be back to normal levels in two to three weeks, which means restoring output to about 10 million barrels per day (bpd), after Saturday's attacks on two sites that usually process and clean up about 5.7 million bpd. 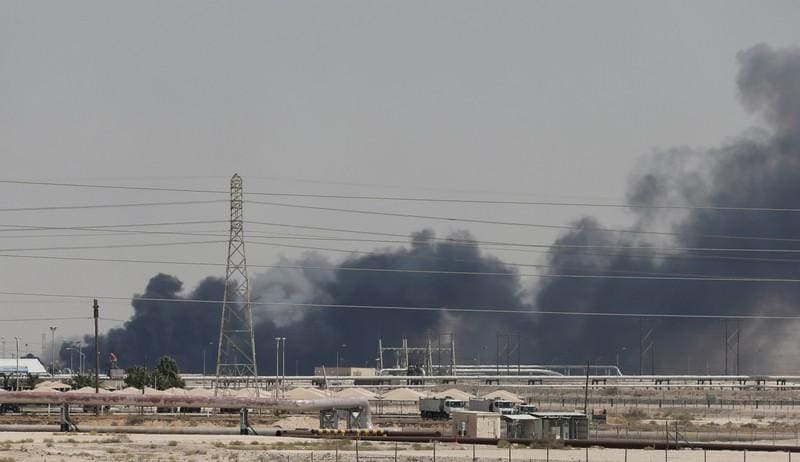 By Julia Payne and Dmitry Zhdannikov

LONDON (Reuters) - Saudi Arabia's ability to avert a global oil supply crunch will only become clear in a few weeks, because for now its crude held in storage can fill the gap and mask the scale of damage to its facilities, traders and analysts say.

Riyadh says production will be back to normal levels in two to three weeks, which means restoring output to about 10 million barrels per day (bpd), after Saturday's attacks on two sites that usually process and clean up about 5.7 million bpd.

While it carries out repairs, the world's biggest oil exporter has promised to keep the physical crude market supplied from its inventories held in the kingdom and abroad, estimated to have been about 180 million barrels in July.

But traders and analysts are skeptical repairs to the Abqaiq and Khurais sites will be swift, while the lack of transparency about Saudi inventories adds to uncertainty about whether Riyadh can keep markets supplied without disruption.

"A lot of October arrival barrels were already on the water so the hole is going to show up towards late October," one senior European oil trader said. "There has been a mad scramble on the paper markets but the physical scramble will come later."

Precisely when any rush for physical crude kicks in will depend on the level of Saudi Arabia's inventories and how long it needs to rely on them to ensure clients receive full allocations.

The Joint Organisations Data Initiative (JODI), a body that issues energy data using submissions by its members such as Riyadh, said Saudi inventories at home and abroad fell 8 million barrels in the month of July - the latest month available - to 180 million barrels.

But one veteran oil trader said the accuracy of the JODI figures was the "big unknown", adding that "overground tracked volume total would appear to be smaller", a reference to calculations from data analytics firms that use satellites to measure storage.

"There was talk of tens of billions invested over two decades to construct underground storage which one suspects contain largely products. But why then have we seen ATC come out and buy products?" he said.

Several trading sources said Aramco had bought at least 120,000 tonnes of diesel for prompt loading in the UAE. It was not clear if the purchases were a result of the attacks.

Gary Ross, founder of Black Gold Investors and a veteran oil industry expert, said it was difficult not to believe that Riyadh was being "overly optimistic" in its timeline for repairs. "Tightness is coming," he said.

Saudi Aramco Chief Executive Amin Nasser said his company had more than 60 million barrels of crude inside the country, without specifying how much was abroad.

Aramco holds oil in storage in Okinawa in Japan, Rotterdam in the Netherlands and at the Egyptian port of Sidi Kerir.

Questions also persist about the speed at which stores at home or abroad have been depleted. Data analytics firm Kayrros estimated Saudi stocks at home fell by nearly 10 million barrels in a single day to 66.5 million barrels on Sept. 16 from 76.4 million on Sept. 15.

Some major clients are already turning to other suppliers to meet their needs. The trading arm of China's Sinopec, Asia's top refiner, chartered at least four crude tankers this week from the United States, ramping up its U.S. shipments.

Even if Saudi Arabia keeps the same volumes flowing to customers, there are signs it may struggle to supply the same grades, an important factor for refiners whose plants are often built to handle a specific range of lighter or heavier crudes.

Abqaiq was the key hub processing for Arab Light and Arab Extra Light coming from the Ghawar, Shaybah and Khurais fields.

Aramco informed at least six refiners in Asia it would still supply full allocated volumes of crude in October, but at least two have been told of a grade switch.

India's Reliance Industries was due to load a shipment of Arab Light just before the attacks but was now taking Arab Heavy instead, two trade sources said. Reliance did not immediately respond to a request for comment.

In a sign that requests to change grades have become widespread, other refiners in South Korea and Japan, were also asked to make a similar switch, one of the sources said.

European and Turkish refiners take mainly Arab Light, typically from Sidi Kerir, and are most at risk. At least one large European refiner has still not been given any October loading dates by Riyadh, an industry source familiar with the matter said.

An Aramco source said on Tuesday the Abqaiq complex was already operating and processing 2 million bpd, although still well below the 4.9 million bpd it handled before the attack.

But Aramco has offered few details about the scale of the damage to both sites. Witness accounts of huge fires caused by the attacks and grainy satellite images showing scorched sites have raised concerns about how swiftly they can be fixed.

"Engineering experts claim the damage alone should have taken weeks to assess, especially with workers only allowed back in the Abqaiq complex for the first time (on Tuesday)," consultancy Energy Aspects wrote in a note.

"It is likely that the full extent of the damage will only emerge in the coming weeks," it said.