By Alasdair Pal and Neha Dasgupta NEW DELHI (Reuters) - U.S. Secretary of State Mike Pompeo sought to reduce heightened trade tension with India on Wednesday, promising a renewed focus on negotiating better ties, but giving few specifics of how they would overcome disputes over trade and investment. 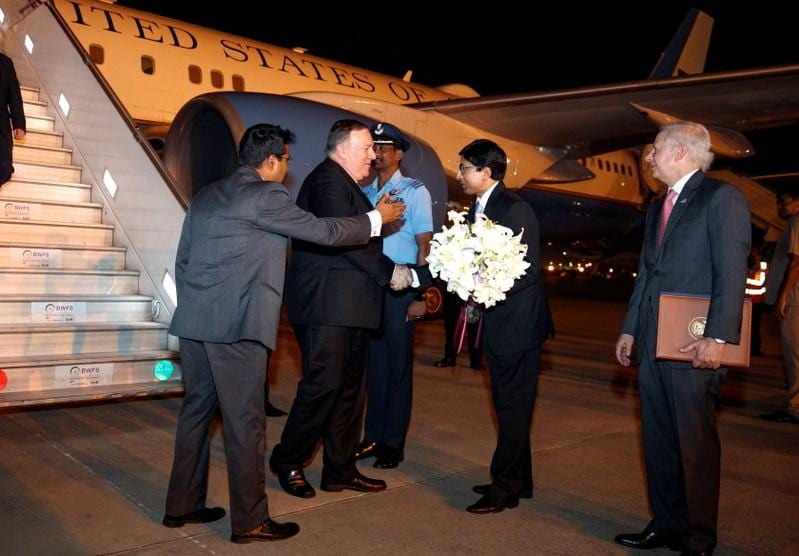 By Alasdair Pal and Neha Dasgupta

NEW DELHI (Reuters) - U.S. Secretary of State Mike Pompeo sought to reduce heightened trade tension with India on Wednesday, promising a renewed focus on negotiating better ties, but giving few specifics of how they would overcome disputes over trade and investment.

Pompeo's India visit comes as the two countries grapple with issues ranging from access to Indian markets for American firms to New Delhi's demand for foreign companies to store Indian data in the country, and exports of steel and aluminium to the U.S.

The two nations are "friends who can help each other all around the world," Pompeo told a joint news conference with Indian Foreign Minister Subrahmanyam Jaishankar after they met.

The current differences were expressed "in the spirit of friendship", he added.

However, any progress on trade would probably be announced at an expected meeting of Indian Prime Minister Narendra Modi and U.S. President Donald Trump at a Group of 20 (G20) summit in Japan this week, economic and political analysts said.

"If there is going to be some kind announcement on trade, it will come at a Trump-Modi meeting," said Neelam Deo, founder of the Gateway House think tank in the financial capital of Mumbai.

The trade disputes have led to higher tariffs by the two countries and created unease over the depth of their security alliance.

In particular, the sudden introduction of new e-commerce rules for foreign investors in February angered the Americans because it showed New Delhi was prepared to move the goalposts to hurt two of the largest U.S. companies, discount retailer Walmart, and Amazon.com Inc.

Jaishankar, a former Indian ambassador to the United States, played down the spat on Wednesday.

"If you trade with someone and they are your biggest trading partner, it is impossible you don't have trade issues," he said.

In an interview with broadcaster India Today on Wednesday night, Pompeo was asked how India could get the Generalized System of Preferences (GSP) trade programme restored.

"We are going to go work to restore these relationships. I am confident we can," Pompeo said, without providing details.

India's ties with Russia and Iran, both now subject to U.S. sanctions, are also a sore point.

The United States is also lobbying India not to proceed with its purchase of S-400 surface-to-air missile systems from Russia.

The missile deal and Iranian oil were both discussed during their meeting, Jaishankar and Pompeo said, but mentioned no resolution of either at the news conference.

"On two of the biggest issues - Iran and Russia - the difference is deep," said analyst Deo, formerly a top Indian diplomat in the United States.

Areas of agreement include efforts to combat increased militant activity in the region, after deadly suicide bomb blasts in Sri Lanka in April.

Both countries have a shared foe in China, which has alarmed them with its inroads in South Asia.

Pompeo criticised China's Belt and Road Initiative, its ambitious plan to finance and build infrastructure across the globe, which some detractors have labelled a debt trap.

For smaller countries, it came "not with strings attached, but with shackles," he said.

Earlier, Pompeo met Modi for talks at the prime minister's residence in the capital, New Delhi, and they exchanged handshakes in images broadcast on television.

"The prime minister expressed his strong commitment to achieve the full potential of bilateral relations in trade and economy, energy, defence, counterterrorism and people-to-people contacts," the foreign ministry said in a statement, without elaborating.

Pompeo leaves India on Thursday morning for the summit of G20 leaders in Japan's western city of Osaka. Pompeo said Modi and Trump would be able to "build on what we talked about today" when they meet in Osaka.