No major surprises: Here are the top 10 of Forbes 100 richest Indians list 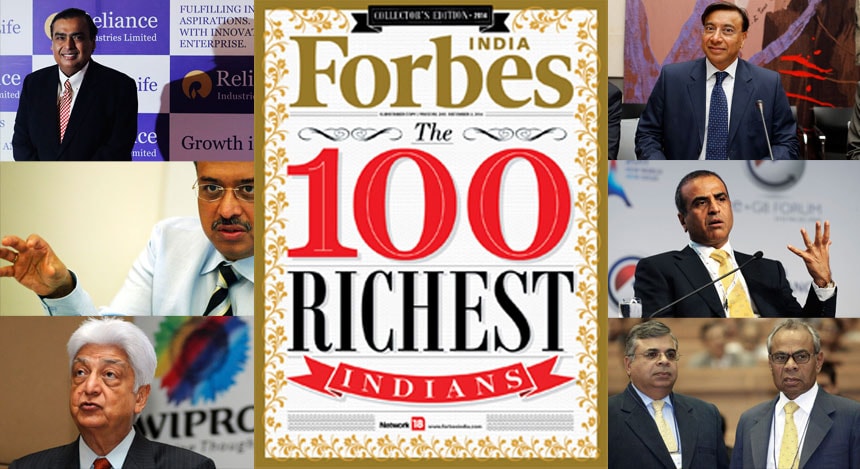 Who are India's richest? The Forbes 100 richest Indians list is out and for the first time ever, every one on the list is a billionaire. The combined net worth of India's 100 wealthiest is US$346 billion, up more than a third from $259 billion in 2013 and you can see the complete list on www.forbesindia.com and in the latest issues of Forbes India. Here are the top 10 richest Indians as per the list.

Mukesh Ambani tops the list for the eighth consecutive year with a net worth of $23.6 billion, up $2.6 billion from last year. Reuters image

Dilip Shanghvi, founder of Sun Pharmaceutical Industries, India's most valuable drug maker, is the new No. 2 on the list after his fortune rose from $4.1 bn to $18 bn over a year with the acquisition of Ranbaxy. Reuters image

Moving up one notch to No. 3 is Azim Premji, whose net wealth increased to $16.4 billion from $13.8 billion. Reuters image

Pallonji Mistry the construction patriarch, who chairs Shapoorji Pallonji Group, got a $3.4 billion boost this year thanks to the rising value of his 18.4 percent stake in Tata Sons. Forbes India image

Arcelor Mittal chief Lakshmi Mittal has seen his fortune decline marginally since last year and drops to fifth on the list. Reuters image

Four brothers, Srichand, Gopichand, Prakash and Ashok, together control the Hinduja Group, a multinational conglomerate with a presence in 37 countries and businesses as diverse as trucks and healthcare. Though their wealth has risen over a year to $13.3 billion they remain in sixth place on the list. AFP image

Kumar Mangalam Birla, head of the Aditya Birla group, stays in the ninth spot with an estimated worth of $9.2 bn up from $7.6 bn last year. Reuters

Bharti Airtel chief Sunil Mittal, caps the list with a net worth of $7.8 bn. He was tenth on the list a year ago as well. Reuters image