PARIS (Reuters) - Usually thronging as summer sales kick off, Paris' Printemps department store is among French retailers bracing for a fall in bargain hunters and revenues this year as the coronavirus outbreak keeps tourists away, further hammering the sector. Clothing chains and department stores across the world have been hit hard by closures during lockdowns 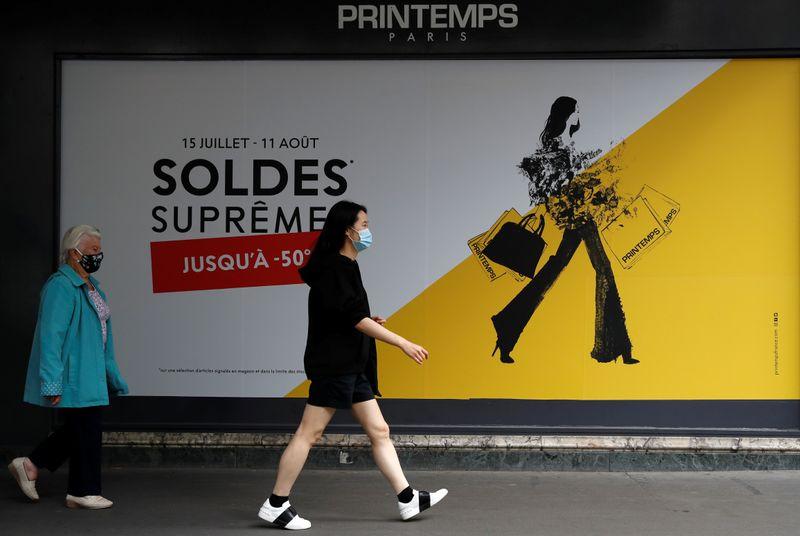 PARIS (Reuters) - Usually thronging as summer sales kick off, Paris' Printemps department store is among French retailers bracing for a fall in bargain hunters and revenues this year as the coronavirus outbreak keeps tourists away, further hammering the sector.

Clothing chains and department stores across the world have been hit hard by closures during lockdowns. In France, retailers were already suffering after transport strikes in January.

Pierre Pelarrey, who runs Printemps' flagship store in central Paris, a magnet for foreign shoppers, said business was likely to be half what it was this time last year.

"We know we're not going to have international clients," he said.

France's official bargain season runs from July 15 until Aug. 11, although many stores have already started promotions in recent weeks, with up to 50% or even 70% off prices.

One bright spot was the return of some French shoppers, Pelarrey said, with many of them more motivated than ever.

"After coming out of lockdown, people that have come to the store are really buying. One out of two will buy something," he said.

Finance Minister Bruno Le Maire has struck an upbeat tone on consumer spending, saying last week it had almost returned to normal as people started splurging what they had saved up during a two-month shutdown.

"Shopping is one way of de-stressing a little ... it's helping us get over this difficult period," said Karina Fomba, who works in the hotel sector and was planning to hit the stores on Wednesday.

French furniture store Conforama, and clothing chains La Halle and Camaieu are among those seeking out buyers as they struggle to survive the crisis.