By Harry Brumpton and Greg Roumeliotis (Reuters) - Papa John's International Inc, the world's third-largest pizza delivery company, has reached out to potential acquirers to ask them to submit offers, people familiar with the matter said on Wednesday. Papa John's shares jumped 10 percent to $50.79 on the news, giving the company a market capitalization of more than $1.6 billion. Papa John's is seeking to fend off efforts by founder John Schnatter to regain control of the company of which he owns about 30 percent 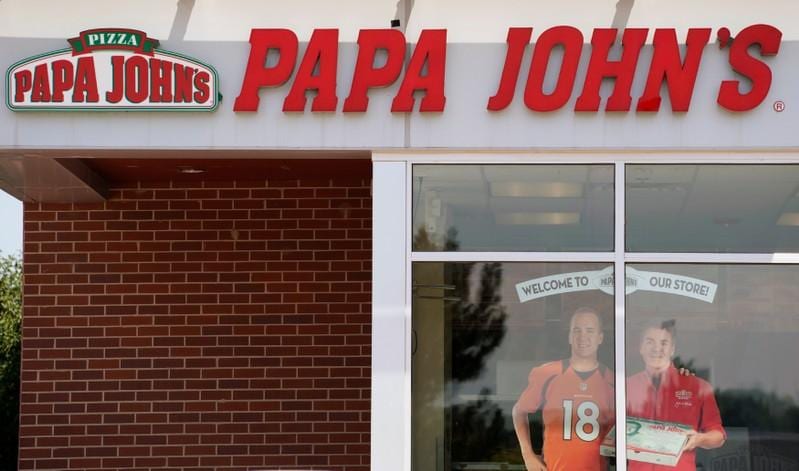 By Harry Brumpton and Greg Roumeliotis

(Reuters) - Papa John's International Inc, the world's third-largest pizza delivery company, has reached out to potential acquirers to ask them to submit offers, people familiar with the matter said on Wednesday.

Papa John's shares jumped 10 percent to $50.79 on the news, giving the company a market capitalization of more than $1.6 billion.

Papa John's is seeking to fend off efforts by founder John Schnatter to regain control of the company of which he owns about 30 percent. He resigned as chairman in July following reports that he had used a racial slur on a media training conference call.

Papa John's sent out information about an auction to sell itself to other companies and private equity firms this week, and expects to receive first-round bids by the end of October, the sources said. There is no certainty of a sale, and Papa John's could also explore an alternative deal, such as receiving an investment, one of the sources added.

The sources asked not to be identified because the matter was confidential. Papa John's declined to comment. Reuters first reported last month that the company had hired Bank of America Corp and Lazard Ltd to prepare for a sale.

It was not clear whether Schnatter himself can find a partner or muster the resources to participate in the auction. CNBC reported earlier that several private equity firms had turned Schnatter down as he explored a potential bid. Papa John's has adopted a so-called poison pill defense to discourage a hostile takeover.

Last month, Papa John’s posted a second-quarter comparable sales decline of 6.1 percent and cut its sales forecast, citing fallout from the company’s split with Schnatter. Negative publicity surrounding Schnatter depressed July traffic in North America, the company said at the time, noting that it was hard to predict how long and how badly that would affect sales. Papa John’s has more than 5,000 locations worldwide, mostly franchised restaurants.

Papa John’s Chief Executive Officer Steve Ritchie has vowed to move beyond the fight with Schnatter with a new advertising and marketing campaign, while also removing Schnatter’s image from company promotions. Two franchisee associations working with the company have expressed support for its strategy.

Ritchie, previously Papa John’s president, took over as CEO in January after Schnatter came under fire in November for criticizing the National Football League’s leadership over national anthem protests by players.

Dealmaking in the restaurant sector is heating up. Arby's-owner Inspire Brands Inc said on Tuesday it would buy Sonic Corp for about $1.57 billion in cash, adding more than 3,600 drive-in restaurants to its portfolio that includes brands such as Buffalo Wild Wings and Rusty Taco.