By Arijit Bose BENGALURU (Reuters) - Palladium surpassed the $1,400 mark for the first time on Thursday, as demand for the auto-catalyst metal overtook its availability in the market, while gold edged lower as the dollar gained on better-than-expected U.S. jobs data. 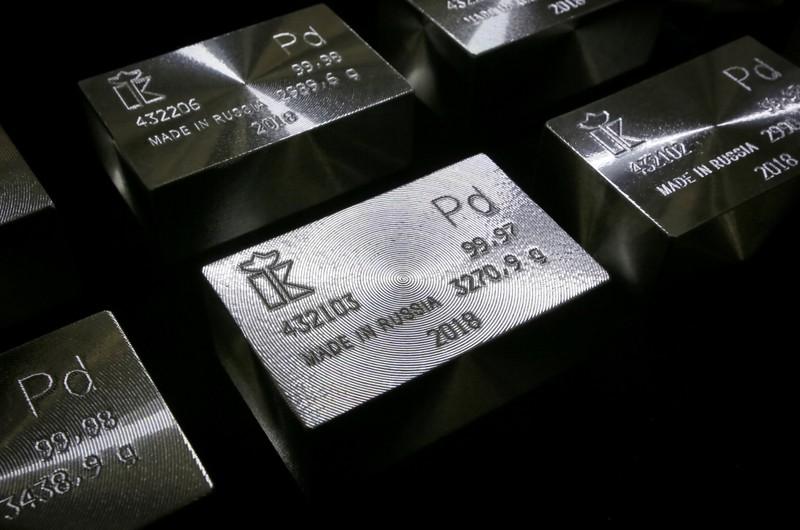 BENGALURU (Reuters) - Palladium surpassed the $1,400 mark for the first time on Thursday, as demand for the auto-catalyst metal overtook its availability in the market, while gold edged lower as the dollar gained on better-than-expected U.S. jobs data.

Adding to palladium's appeal were policy initiatives to help support demand that were unveiled by China, the biggest auto market, Steel said.

The price of palladium, used mainly in emissions-reducing catalysts for vehicles, has jumped more than 70 percent since hitting a trough in mid-August. The metal overtook gold in price terms for the first time in 16 years late last year.

"We are seeing steady buying in modest amounts; just no supply and no one willing to sell because you don't know where it will stop," said Tai Wong, head of base and precious metals derivatives trading at BMO.

"There is not sufficient supply in the market, so people are purchasing metals from the ETFs," said Samson Li, a Hong Kong-based precious metals analyst at Refinitiv GFMS.

"Gold dipped after the good jobless claims number from the United States, and has not recovered since. Now, the dollar is grinding higher with yields backing up, further weighing on the metal," BMO's Wong said.

The greenback ticked up on Thursday after stronger than expected economic data reports, while the pound stabilized as British policymakers sought consensus on how to exit the European Union.

The number of Americans filing applications for jobless benefits unexpectedly fell last week, pointing to sustained labor market strength that should continue to underpin the economy.

A stronger dollar makes gold more expensive for holders of other currencies.

However, the metal remains supported by a variety of factors, including a prolonged partial U.S. government shutdown, a possible pause in the U.S. Federal Reserve's rate hike cycle, and concerns surrounding Brexit, analysts said.

(Reporting by Arijit Bose and Arpan Varghese in Bengaluru)