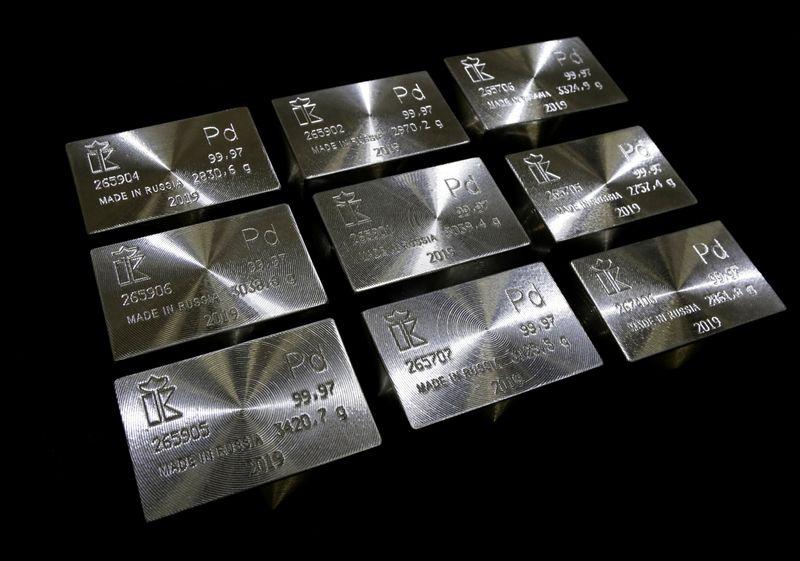 (Reuters) - Palladium zoomed past $1,900 an ounce for the first time ever on Tuesday as a power crisis halted production at mines in major producer South Africa, exacerbating concerns over supply of the autocatalyst and extending the metal's record run.

"South Africa produces 40% of world's palladium and the ESKOM outages are hitting some mines, giving palladium just that extra nudge above $1,900," said Tai Wong, head of base and precious metals derivatives trading at BMO.

"We've now had 13 consecutive positive sessions, which seems a little rich, so it wouldn't be surprising to see some consolidation, though the overall trend continues to look quite positive."

Mines across South Africa are shutting down after flash flooding caused the largest power blackouts in more than a decade, with major miners Harmony Gold

Scarcity concerns surrounding palladium have already helped the metal rise about 50% in 2019, owing to its large demand in the auto sector.

Gold, meanwhile, got a further lift form uncertainties surrounding U.S.-China trade talks ahead of a Dec. 15 tariff deadline and a weaker dollar.

"Gold is riding higher on dollar weakness and caution ahead of a looming tariff deadline," said FXTM analyst Lukman Otunuga.

If Washington proceeds with the earmarked tariffs, gold could get a further boost, he added.

A report from the Wall Street Journal said trade negotiators from both sides are planning for a delay of the December tariff.

Gold pared gains slightly on the report, but remained supported as doubts over a phase-one deal persisted.

Markets also sought monetary outlook for 2020 by the U.S Federal Reserve, which is expected to keep rates unchanged at its two-day policy meeting ending Wednesday.

"In the short-term, if the Fed shifts to a more hawkish assessment, gold is at risk from further repositioning. Technically this could pull prices back to $1,410/oz," UBS analysts said in a note.