By Rania El Gamal, Ahmad Ghaddar and Olesya Astakhova ALGIERS (Reuters) - OPEC's leader Saudi Arabia and its biggest oil-producer ally outside the group, Russia, ruled out on Sunday any immediate, additional increase in crude output, effectively rebuffing U.S. President Donald Trump's calls for action to cool the market. 'I do not influence prices,' Saudi Energy Minister Khalid al-Falih told reporters as OPEC and non-OPEC energy ministers gathered in Algiers for a meeting that ended with no formal recommendation for any additional supply boost 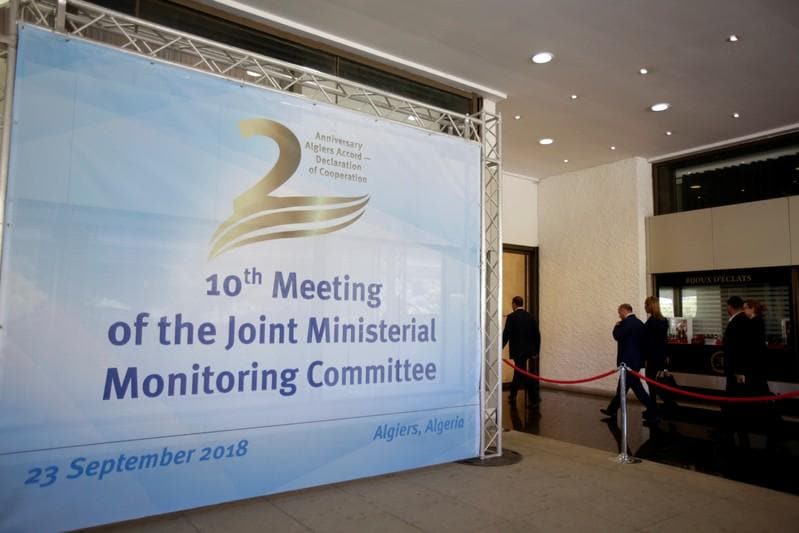 "I do not influence prices," Saudi Energy Minister Khalid al-Falih told reporters as OPEC and non-OPEC energy ministers gathered in Algiers for a meeting that ended with no formal recommendation for any additional supply boost.

Benchmark Brent oil reached $80 a barrel this month, prompting Trump to reiterate on Thursday his demand that the Organization of the Petroleum Exporting Countries lower prices.

The price rally mainly stemmed from a decline in oil exports from OPEC member Iran due to fresh U.S. sanctions.

"We protect the countries of the Middle East, they would not be safe for very long without us, and yet they continue to push for higher and higher oil prices! We will remember. The OPEC monopoly must get prices down now!" Trump wrote on Twitter.

Falih said Saudi Arabia had spare capacity to raise output but such a move was not required at the moment and might not be needed next year as, according to OPEC's projections, a stellar rise in non-OPEC production could exceed global demand growth.

"The markets are adequately supplied. I don't know of any refiner in the world who is looking for oil and is not able to get it," Falih said, adding that Saudi Arabia could raise output by up to 1.5 million barrels per day (bpd) if needed.

"Given the numbers we saw today, that (an output increase in 2019) is highly unlikely unless we have surprises on the supply and demand," Falih added.

The statement from Trump, meanwhile, was not his first criticism of OPEC.

Higher gasoline prices for U.S. consumers could create a political headache for Republican Trump before mid-term congressional elections in November.

Iran, OPEC's third-largest producer, has accused Trump of orchestrating the oil price rally by imposing sanctions on Tehran and accused its regional arch-rival Saudi Arabia of bowing to U.S. pressure.

A mid-term report released by OPEC on Sunday forecast that non-OPEC supply from countries led by the United States would rise by 2.4 million bpd in 2019 while global oil demand should grow by just 1.5 million.

"Our attention is shifting to 2019. We have been briefed on the prospect of 2019 inventory builds which result from significant supply growth from non-member counties," Falih said.

Russian Energy Minister Alexander Novak said no immediate output increase was necessary, although he believed a trade war between China and the United States as well as U.S. sanctions on Iran were creating new challenges for oil markets.

"Oil demand will be declining in the fourth quarter of this year and the first quarter of next year. So far, we have decided to stick to our June agreements," Novak said.

Seeking to reverse a downturn in oil prices that began in

reduce supply by some 1.8 million bpd.

In June this year, however, after months of cutting by more

than their pact had called for, largely due to involuntary

reductions from Venezuela and other producers, they agreed to

That equates to an increase of about 1 million bpd, but the latest data shows they are some way from achieving that target.

In August, OPEC and its allies cut production by 600,000 bpd more than their pact required, mainly as a result of falling output in Iran as customers in Europe and Asia reduced purchases ahead of the U.S. sanctions deadline.

OPEC put Iran's current production at 3.58 million bpd, down some 300,000 bpd from the start of the year, according to OPEC's secondary sources such as researchers and ship-trackers.

Iran's OPEC governor Hossein Kazempour Ardebili insisted on Sunday that Iranian production was steady at 3.8 million bpd but appeared to soften his stance on potential increases in OPEC output.

"If there is a fall not only from Iran, but anybody else, it is the responsibility of OPEC and non-OPEC to balance the market," Kazempour told reporters.

Falih said returning to 100 percent compliance was the main objective and should be achieved in the next two to three months.

Although he refrained from specifying how that could be done, Saudi Arabia is the only oil producer with significant spare capacity.

"The biggest issue is not with the producing countries, it’s with the refiners, it's with the demand. We in Saudi Arabia have not seen demand for any additional barrel that we did not produce."

The OPEC/non-OPEC monitoring committee next meets on Nov. 11 in Abu Dhabi, followed by a full OPEC gathering at its Vienna headquarters on Dec. 6-7.