By Stephanie Kelly and Devika Krishna Kumar NEW YORK (Reuters) - Oil prices steadied on Friday after steep losses in the previous session, supported by rising tensions between the United States and Iran, but weighed by concerns slowing economic growth could dent global oil demand. Benchmark crude prices were on track for weekly declines, having fallen sharply earlier in the week on demand worries. Brent crude futures fell 3 cents to $61.90 a barrel by 1:37 a.m 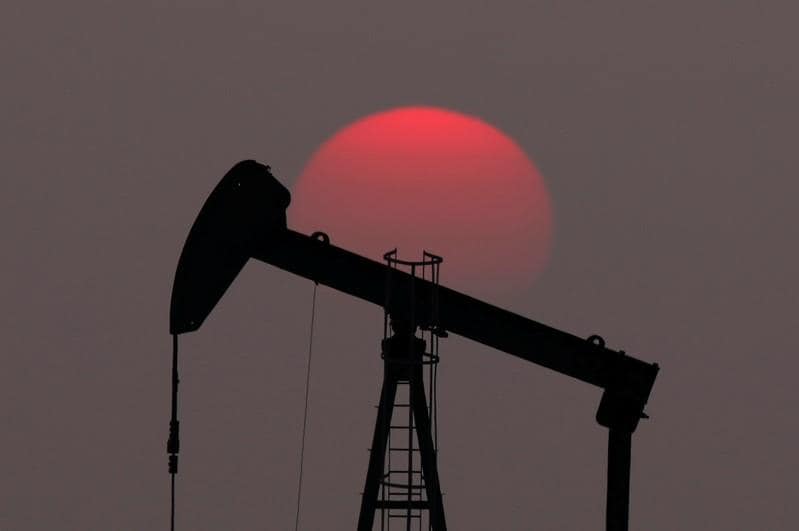 Benchmark crude prices were on track for weekly declines, having fallen sharply earlier in the week on demand worries.

West Texas Intermediate crude futures fell 24 cents to $55.06 a barrel. WTI was set to fall 8.4% this week, its steepest loss since May.

"Our opinion of the complex still favors some wide swinging trade in both directions as pricing continues to be buffeted by an array of cross currents that include a heightening of tensions between the U.S. and Iran on the bullish side and mounting global oil demand concerns on the bearish side," Jim Ritterbusch of Ritterbusch and Associates said in a note.

In the latest sign of increasing tensions in the Middle East, a senior Trump administration official said on Friday the United States will destroy any Iranian drones that fly too close to its ships.

The United States said on Thursday a U.S. Navy ship had "destroyed" an Iranian drone in the Strait of Hormuz after the aircraft threatened the vessel, but Iran said it had no information about losing a drone.

The episode has injected further geopolitical risk into the oil market.

Prices were also buoyed Friday by indications the U.S. Federal Reserve will cut rates aggressively to support the economy.

Meanwhile, U.S. energy firms this week reduced the number of oil rigs operating for a third week in a row as drillers follow through on plans to cut spending.

Drillers cut five oil rigs in the week to July 19, bringing the total count down to 779, the lowest since February 2018, General Electric Co's Baker Hughes energy services firm said in its closely followed report on Friday.

Two influential Federal Reserve officials sharpened the public case for acting to support the U.S. economy on Thursday, reviving bets the central bank may deliver a larger-than-expected cut this month.

Still, the longer-term outlook for oil has grown increasingly bearish.

The International Energy Agency (IEA) does not expect oil prices to rise significantly because demand is slowing and there is a glut in global crude markets, the IEA's Fatih Birol said on Friday in public comments.

The IEA is reducing its 2019 oil demand growth forecast to 1.1 million barrels per day (bpd) from 1.2 million bpd due to a slowing global economy amid a U.S.-China trade spat, Birol told Reuters in an interview on Thursday.

"Macroeconomic concerns, uncertainty on trade discussions and increasing oil supply from the U.S. continued to weigh on sentiment," said Warren Patterson, head of commodities at ING.

(Reporting by Dmitry Zhdannikov in London, Aaron Sheldrick in Tokyo and Koustav Samanta in Singapore; editing by Chris Reese and Chizu Nomiyama)