By Laura Sanicola NEW YORK (Reuters) - Oil prices settled 5% higher on Friday in their second consecutive week of gains as U.S. producers cut production with the number of drilling rigs falling to a record low, and as more states moved ahead with plans to relax lockdowns intended to halt the coronavirus pandemic 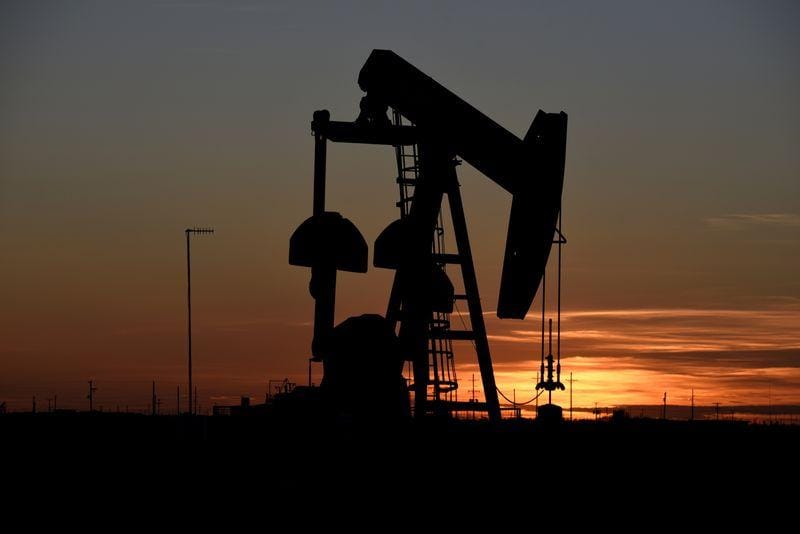 NEW YORK (Reuters) - Oil prices settled 5% higher on Friday in their second consecutive week of gains as U.S. producers cut production with the number of drilling rigs falling to a record low, and as more states moved ahead with plans to relax lockdowns intended to halt the coronavirus pandemic.

The number of operating oil and natural gas rigs fell by 34 to an all-time low of 374 this week - reflecting data going back 80 years - as the energy industry slashes output and spending to deal with the coronavirus-led crash in fuel demand.

North American oil companies have shut production faster than analysts expected and are on track to withdraw about 1.7 million barrels per day (bpd) of output by the end of June.

Both contracts posted a second week of gains, with Brent advancing over 18% this week and WTI up about 33%.

"This advance of the past couple of weeks has been a bit suspect given the fact that coronavirus cases continue to increase and the U.S. crude surplus is maintaining a steep up trend where a record U.S. stock level is likely to be achieved in next week's EIA report," Jim Ritterbusch, president of Ritterbusch and Associates in Galena, Illinois, said in a report.

The U.S. Energy Information Administration's weekly report on Wednesday showed 15 weeks of consecutive rises in crude stocks although the rate of growth in inventories has slowed since a record build of 19 million barrels in early April.

The market was now watching for more data that shows that Organization of the Petroleum Exporting Countries (OPEC) and allies led by Russia - known as OPEC+ - are complying with a record 9.7 million bpd production cuts that began this month, according to Andrew Lipow, president of Lipow Oil Associates in Houston.

"I expect now prices will pull back to $20 a barrel because skepticism will come into the market about the compliance of OPEC+ on the production cuts," said Lipow.

Iraq has yet to inform its regular oil buyers of cuts to its exports, suggesting it is struggling to fully implement supply cuts.

"All it takes is one or two countries not to comply and it could open the door for others," Lipow said.

Australia on Friday became the latest country to plan an easing of lockdowns, while France, parts of the United States and countries such as Pakistan are also planning to ease restrictions.

Market participants were also watching how the economic crisis unfolding in the United States affects oil demand in the coming months. The world's biggest economy lost a staggering 20.5 million jobs in April, the steepest plunge in payrolls since the Great Depression.

(Reporting by Laura Sanicola in New York and Ahmad Ghaddar in London, Additional reporting by Aaron Sheldrick in TOKYO; Editing by Marguerita Choy and Kirsten Donovan)