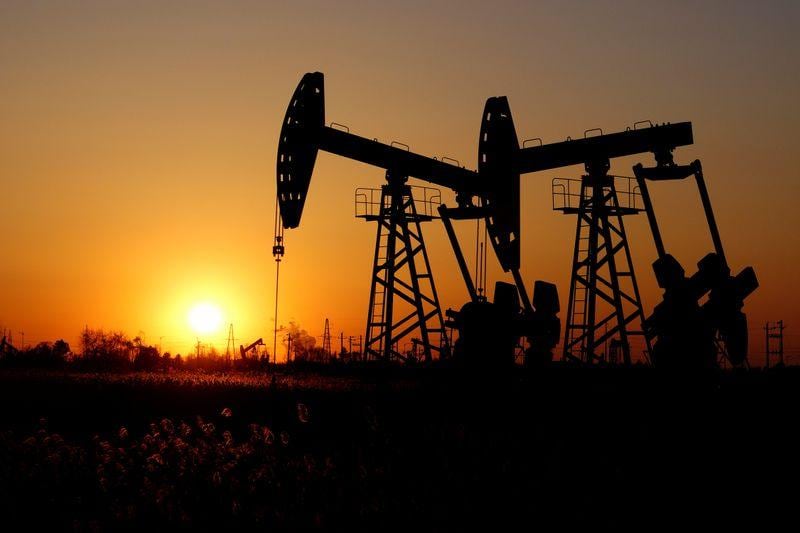 NEW YORK (Reuters) - Oil prices inched lower on Friday as Hurricane Laura passed the heart of the U.S. oil industry in Louisiana and Texas without causing any widespread damage and companies were beginning to restart operations.

Both benchmarks were on track for weekly gains of about 1.4%, with WTI headed for a fourth straight weekly rise. The benchmarks hit five-month highs during the week as U.S. producers cut crude output ahead of Laura at a rate close to the level of 2005's Hurricane Katrina.

"The oil trade has been featured by strong advances at the start of the week as a sizable amount of storm premium was pumped into the market ahead of Hurricane Laura, followed by a major erasure of hurricane premium following the storm's arrival as limited impact on offshore crude production or refinery activity was indicated," said Jim Ritterbusch, president of Ritterbusch and Associates.

The oil market has had an unusually long spell of low volatility, analyst Eugen Weinberg at Commerzbank said, in contrast with stock markets.

"It didn't even react to a weaker dollar. There's no impulse in either direction. It has seldom had so little volatility for such a long period, especially given the dynamic situation on the demand and supply sides," Weinberg said.

Laura, since downgraded to a tropical depression, hit Louisiana early on Thursday with winds of 150 miles per hour (240 km per hour). The storm killed at least six people, damaged buildings and felled trees. Power was cut to hundreds of thousands in Louisiana and Texas, but refineries were spared from massive flooding.

Oil producers had shut 1.56 million barrels per day (bpd) of crude output, or 83% of the Gulf of Mexico's production, while nine refineries had shut around 2.9 million bpd of capacity, or 15% of U.S. processing capacity, ahead of the hurricane.

However, repairs to Citgo Petroleum's 418,000-bpd Lake Charles, Louisiana, plant could take four to six weeks, according to Mizuho Securities. The company did not immediately reply to a request for comment.

Late on Thursday, the Port of Houston, the top U.S. crude oil export hub accounting for about 600,000 bpd of shipments, was in the process of reopening to commercial shipping.

Further ahead, demand expectations remained bearish. The contango between Brent crude for nearby delivery and six-months ahead remained near its widest since late May with the front-month contract more than $2 cheaper.

"Aside from Saudi Arabia, everyone else is clear that global oil demand won’t return to 2019 (levels) until at least 2022. The latest monthly estimate from the IEA/EIA/OPEC triumvirate suggests consumption will not recover to pre-pandemic levels next year," PVM Oil Associates said in a daily note.

(Reporting by Julia Payne in London, Sonali Paul in Melbourne and Roslan Khasawneh in Singapore; Editing by Marguerita Choy and David Gregorio)