In a significant move, the Oil Ministry is mulling granting permission to drill exploration wells within an oil and gas field but with the condition that cost recovery of such wells would be allowed only in case there is a commercially exploitable discovery.

Reliance Industries and Cairn India want to drill exploration wells in already producing oil and gas fields, but the ministry's technical arm DGH had previously opined that such activity in an area that is producing hydrocarbons is not permissible under Production-Sharing Contract (PSC).

DGH felt the government's profit share, which is triggered when an explorer recovers all his cost, would be adversely impacted if new costs are added. To get around this, the ministry is now formulating a policy to allow cost recovery of an exploration well drilling in a producing field, only in circumstances where it leads to a commercially exploitable find, official sources said. 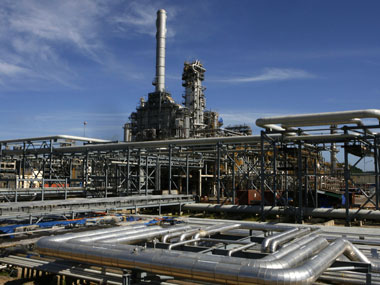 This would be a significant departure from the signed contracts that allow companies to first recover all their costs before sharing profits with the government.

Globally, explorers keep drilling exploration wells to replace the reserves that may have been produced. And the new change the government is proposing, is bound to be opposed by operators like RIL.

While RIL has proposed to drill an exploration well on the flagging D1&D3 gas fields in the KG-D6 block to study reservoir characteristic, Cairn wants to drill new probes to help raise output from the Rajasthan block to 300,000 barrels per day (bpd) from 175,000 bpd.

The ministry is in agreement with the operators on the need to drill exploration wells within a producing oil or gas field so as to add more reserves and increase production life but it does not want to take a decision that CAG may tomorrow criticise as causing loss to the exchequer in lower profit petroleum, sources said.

Directorate General of Hydrocarbons (DGH) had sometime back taken a view that exploration is not permitted within an area that has been delineated after discoveries for production of hydrocarbons. As a way out, the ministry wants to frame a new policy for allowing exploration in a development area and will put it up to the Cabinet Committee on Economic Affairs (CCEA) for approval, they said.

Globally, exploration is permitted in fields that are under production so as to keep adding new reserves to replenish ones that have been produced. In absence of rejuvenation, the fields will terminally decline from the day output starts.

The same principal has been followed in fields in Assam and Mumbai offshore.Under Production Sharing Contract (PSC), all petroleum operations, be it exploration, production or appraisal well, are cost recoverable - meaning the cost of such investment is first allowed to be deducted from revenues earned from sale of oil/gas and profits split with the government only after that.

Cairn believes that production from its prolofic Rajasthan block can reach 300,000 bpd or 15 million tons per annum and has made an application to the government seeking permission to explore within the 3,111 square km mining lease covering 25 oil and gas finds.

It has even given up its rights under PSC by proposing that it will not seek recovery of cost of the exploration well unless it is successful ie, results in a commercial discovery. Cost of a dry or no discovery well will be borne by the company.

RIL however does not believe in surrendering its rights guaranteed under PSC-that is to recover all exploration and production cost from sale of oil or gas before sharing profits with the government. But to give government the comfort, it has as a one-time exception agreed to drill the exploration well 'MJ1' at its sole risk and recover cost only if the discoveries are assessed to be commercial.

Sources said RIL believes that exploration well is clearly allowed in any mining lease area under law and the Production Sharing Contract (PSC) also supports it. Cairn also believes that the PSC defines a development area as one that not just includes a discovery or a group of discoveries but also "area of potential petroleum deposits".

These deposits can only be exploited if exploration is allowed within the mining lease. Dhirubhai-1 and 3 (D1&D3) fields in the east offshore KG-D6 block of RIL have seen output fall from 53-54 million standard cubic metre per day achieved in March, 2010 to 21.93 mmscmd this month.

Together with just over 5.53 mmscmd output from MA oilfield in the same block, KG-D6 is producing about 27.5 mmscmd. This output is short of 80 mmscmd production level that was envisaged in the field development plan approved in 2006.

Vedanta Resources Chairman Anil Agarwal had on July 6 written to the Prime Minister Manmohan Singh seeking his intervention so that his group firm Cairn India is allowed to explore oil in the prolific Rajasthan block.

"The Rajasthan Production Sharing Contract (PSC) and the mining lease have enabling provisions that allow carrying on exploration in development area; however, we have been asked to obtain government approval," Agarwal, whose group had last year acquired Cairn India, wrote to Prime Minister on July 6.

The 3,111 sq km development area was ring-fenced from an exploration area more than three times its size after discoveries were made.