By Jessica Resnick-Ault NEW YORK (Reuters) - Oil soared more than 5% on Thursday after Iran shot down a U.S. military drone, raising fears of a military confrontation between Tehran and Washington 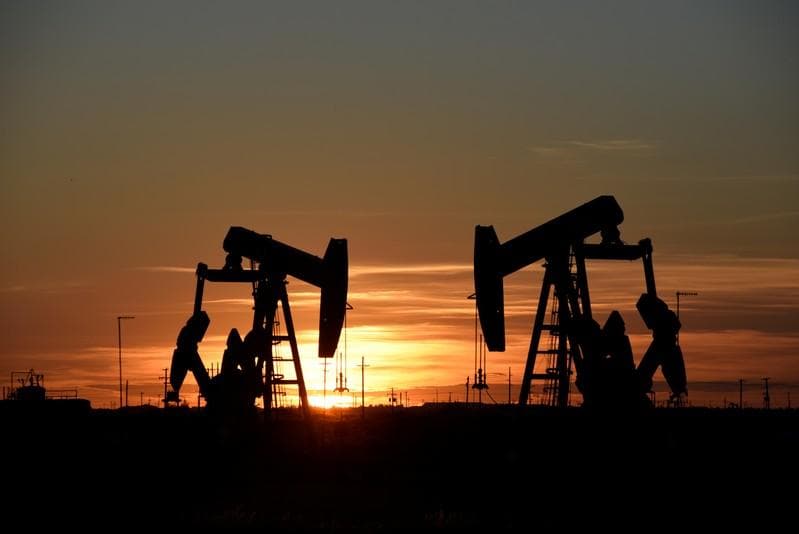 NEW YORK (Reuters) - Oil soared more than 5% on Thursday after Iran shot down a U.S. military drone, raising fears of a military confrontation between Tehran and Washington.

Expectations that the U.S. Federal Reserve could cut interest rates at its next meeting, stimulating growth in the world's largest oil-consuming country, and a drop in U.S. crude inventories also supported prices.

"It's a confluence of events: there's a looming easing cycle which is going to hit the dollar and prop up commodity prices and there are also the tensions with Iran," said John Kilduff, a partner at Again Capital Management in New York.

The security premium built into oil prices could rise further as tensions between the U.S. and Iran heat up, he said.

Brent's premium over WTI narrowed to its lowest since April. The move came as U.S. crude rose more quickly than Brent due to the tailwind provided by potential Federal Reserve policy, said Bob Yawger, director of futures at Mizuho in New York.

U.S. President Donald Trump played down Iran's downing of a U.S. military drone, saying he suspected it was shot by mistake and that "it would have made a big difference" to him if the remotely-controlled aircraft had been piloted.

While the comments appeared to suggest Trump was not eager to escalate the latest in a series of incidents with Iran, he also warned that: "This country will not stand for it."

Tehran said the unarmed Global Hawk surveillance drone was on a spy mission over its territory but Washington said it was shot down over international airspace.

Tension has been rising in the Middle East, home to over 20% of the world's oil output, after attacks on two tankers near the Strait of Hormuz, a chokepoint for oil supplies. Washington blamed Tehran for the tanker attacks. Iran denied any role.

Concern about slowing economic growth and a U.S.-China trade dispute has pulled oil lower in recent weeks. Brent reached a 2019 high of $75 in April.

"The Fed and the cutting of rates is something that will provide more substantial support," he said.

Gulf OPEC producers will keep their July oil production within their OPEC target despite the current global supply cut pact expiring at end of June, OPEC sources said, a signal that the Gulf exporters are reluctant to boost supply.

The Organization of the Petroleum Exporting Countries and allies including Russia look set to extend a deal on cutting 1.2 million barrels per day of production. The coalition known as OPEC+ agreed this week to meet on July 1-2, ending a month of wrangling about the timing.