By Herbert Lash and Marc Jones NEW YORK/LONDON (Reuters) - Oil and global equity markets charged back on Tuesday after the prior day's steep losses as the world's biggest economies moved to cushion the impact of the coronavirus, but stock gains in Europe failed to hold as investors remained skittish. The price of Brent crude climbed 10% on hopes a supply cut deal could be rescued and most benchmark government bond yields rose from record lows as governments outlined broad measures to confront the epidemic's economic and human toll. U.S 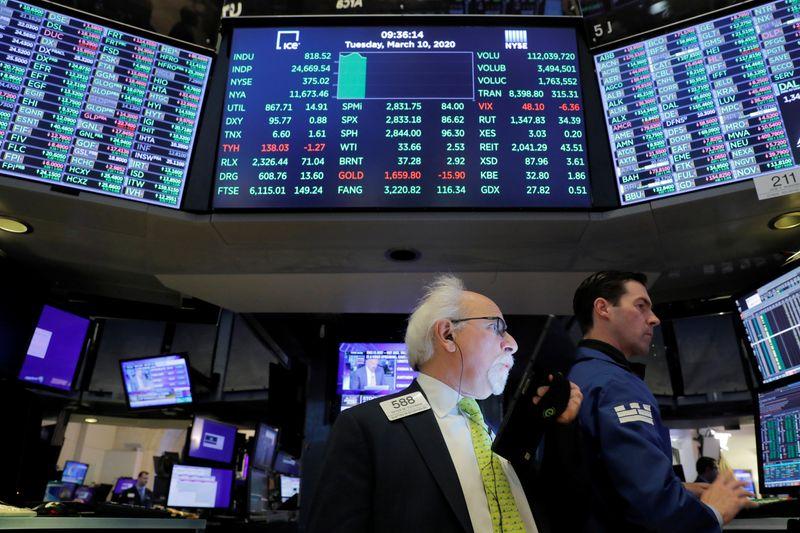 NEW YORK/LONDON (Reuters) - Oil and global equity markets charged back on Tuesday after the prior day's steep losses as the world's biggest economies moved to cushion the impact of the coronavirus, but stock gains in Europe failed to hold as investors remained skittish.

The price of Brent crude climbed 10% on hopes a supply cut deal could be rescued and most benchmark government bond yields rose from record lows as governments outlined broad measures to confront the epidemic's economic and human toll.

U.S. President Donald Trump said he will ask Congress for a payroll tax cut and other "very major" stimulus moves to ease the economic pain, but details were still forthcoming.

During a White House meeting with health executives, Trump also said the U.S. administration intended to help airlines and the cruise line industry. He later met with Republican senators to discuss proposals for boosting the economy.

Japan unveiled a second package of measures worth about $4 billion in spending, focusing on support to small and midsized firms.

U.S. stocks jumped more than 3% at the open, pared gains to trade briefly negative and then roared back to close up almost 5%. Investors hoped Monday's rout marks the low of a downturn that has pushed Wall Street's major indexes close to a bear market - defined as a decline of 20% from recent peaks.

"It seems like that yesterday was such a collection of so much bad news, it shocked the market down. Today with fresh eyes people are picking out the names they think have dropped the most," Meckler said.

The S&P 500 forward price-earnings ratio for this year fell to 15.8 as of Monday, in line with the historic average and down from 19.3 less than a month ago, according to Refinitiv.

MSCI's gauge of stocks across the globe <.MIWD00000PUS> gained 2.55% but the pan-European STOXX 600 index <.STOXX> lost 1.14%, after initially trading higher. A jump in infections in Italy, Germany and Britain unsettled investors.

The major European bourses remained in bear territory. The FTSE 100 <.FTSE> in London almost eked out a gain but closed down 0.1% as oil companies rebounded from the carnage on Monday as Saudi Arabia and Russia engaged in a price war.

"Traders are a bit nervy, the only positive news we've been getting out is probably rate cuts or tax cuts," said Michael Baker, an analyst at ETX Capital in London.

Yields on benchmark U.S. 10-year Treasury debt more than doubled to 0.801% and those on German Bunds jumped around 20 basis points at one point as investors pared some safe-haven holdings, though they were beginning to ease again.

The dollar rallied after huge losses against the safe-haven Japanese yen and Swiss franc, but analysts said it was too early to predict a floor.

The oil rally had the most horsepower. About half of oil's massive losses from Monday were clawed back, offering hope that markets had found a floor despite still-fragile sentiment.

Gold prices fell 1%, retreating from the previous session's jump above the key $1,700 level, as safe-haven demand waned a little amid speculation about global stimulus measures. [GOL/]

The bond market has priced in a global recession of unknown length. Investors are fully pricing an easing of at least 75 basis points at the next Fed meeting on March 18, while a cut to near zero was seen as likely by April. <0#FF:>