By John McCrank, Alexandra Alper and Pei Li NEW YORK/WASHINGTON/HONG KONG/ (Reuters) -The New York Stock Exchange could do a second U-turn in the flip-flop saga that saw them decide to delist three Chinese telecom giants, the latest twist amid confusion about rules set by the Trump administration and a backdrop of tension within Washington on China policy. The NYSE said late Monday that it decided not to delist China Mobile Ltd, China Telecom Corp Ltd and China Unicom Hong Kong Ltd in light of consultation with regulatory authorities in connection with the U.S. 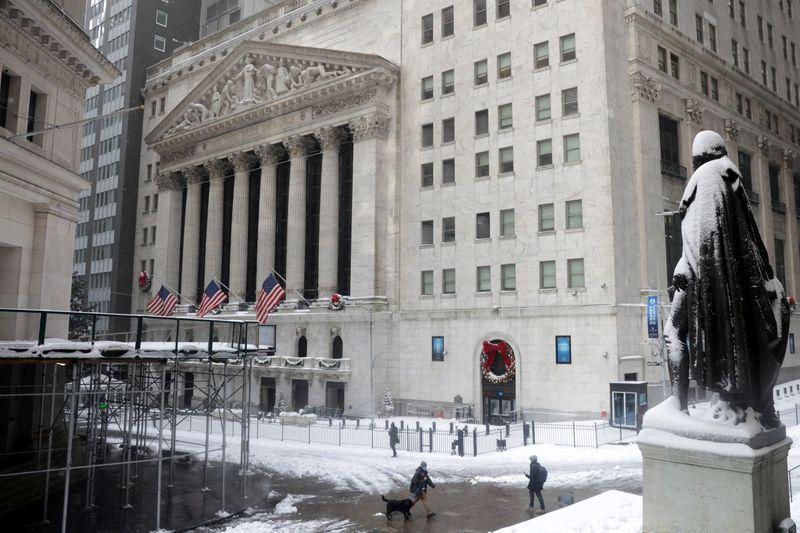 NEW YORK/WASHINGTON/HONG KONG/ (Reuters) -The New York Stock Exchange could do a second U-turn in the flip-flop saga that saw them decide to delist three Chinese telecom giants, the latest twist amid confusion about rules set by the Trump administration and a backdrop of tension within Washington on China policy.

The NYSE said late Monday that it decided not to delist China Mobile Ltd, China Telecom Corp Ltd and China Unicom Hong Kong Ltd in light of consultation with regulatory authorities in connection with the U.S. Treasury's Office of Foreign Assets Control.

The NYSE made the decision as a result of ambiguity about whether the securities were actually covered, but if they are confirmed to be on the list, they will be delisted, a source familiar with the situation said on Tuesday. Bloomberg earlier reported that the NYSE may flip back.

Mnuchin has long been seen as taking a dovish view on China, seeking to thwart attempts by hardliners in the administration - many within the State Department - to crack down on Chinese companies.

"For years, Treasury has led a rear-guard action to soften some of the harsher policies related to Chinese companies," said Leland Miller, the CEO of the U.S.-based consultancy China Beige Book. "It is apparent this is continuing to happen."

Republican Senator and China hardliner Marco Rubio, said in a tweet that any suggestion that the U.S. Treasury may have caused the NYSE to wind back the ruling was "outrageous."

"If it is true that someone at (Treasury) advised (NYSE) to reverse the decision to delist these Chinese companies, it was a outrageous effort to undermine (President Trump's) Executive Order," he tweeted.

Bloomberg reported that the NYSE was reconsidering its decision after the Mnuchin opposition.

NYSE is owned by Atlanta-based Intercontinental Exchange Inc (ICE), which is run by billionaire Jeffrey Sprecher, whose wife Kelly Loeffler, also a former ICE executive, is one of two Republican senators facing run-off elections on Tuesday in Georgia. Loeffler is a staunch supporter of President Donald Trump.

Coming in the final weeks of Trump's presidency, the flip-flop has underscored the lack of clarity about the implementation and implications of the U.S. ban on investment in 35 Chinese companies deemed to have military links, said Tariq Dennison, managing director at GFM Asset Management in Hong Kong.

Dennison's funds hold China Mobile shares in both Hong Kong and New York. He has almost entirely unwound New York positions in anticipation of needing to find U.S. clients investments with less exposure to risks associated with the investment bans.

The decision also raised further questions about how the order will be handled by President-elect Joe Biden who is set to take office on Jan. 20 and could revoke it easily. His transition team has declined to comment on plans for the directive.

William Kirby, a Harvard Business School professor focused on China, said on Monday that whereas the Trump administration has taken what he called a “one-size-fits-all” approach to its regulation of Chinese companies, the Biden administration would likely have company-by-company reviews.

Miller said that while the last year had seen toughening policies on investment flows into Chinese companies, "many of these rules are likely to fall by the wayside."

The November executive order bans U.S. investors from buying shares of companies that Washington alleges are owned or controlled by the Chinese military starting in November 2021.

While the directive stops short of forcing a delisting, a bill signed into law by Trump in November will kick Chinese companies off U.S. stock exchanges if they do not fully comply with the country’s auditing rules in three years.

The NYSE had planned to delist the companies - China Mobile, China Telecom and China Unicom - before Jan. 11.

One China expert who has worked with Congress on delisting issues said that the NYSE may have made the U-turn if they sought clarity from Treasury about the rules and been told they did not need to delist.

Others added that the reversal made sense for the bourse.

"China accounts for at least one-fourth of U.S. (stock exchanges') foreign income. It's a smart thing to do," said Francis Lun, CEO of Geo Securities.

The November order from Trump's administration has prompted index makers including FTSE Russell and MSCI Inc to cut a dozen Chinese companies on the list from their benchmarks, but none removed the three telecom firms, all of which have major passive U.S. funds amongst their top shareholders.

The three telecom firms said in statements that they had taken note of the NYSE's latest announcement and would release information in accordance with regulations, adding that investors should pay attention to investment risks.

China's foreign ministry has lambasted what it calls the United States stretching of the concept of national security to suppress Chinese companies.

It reiterated on Tuesday that the status of the United States as an international financial centre relies on the confidence that global companies and investors have in the certainty of its rules.

Explainer: What is Parler and why has it been pulled offline?

By Elizabeth Culliford and Munsif Vengattil (Reuters) - Before Apple Inc banned Parler from its App Store store on Saturday, the social media site topped the charts as the most popular free app on its App Store in the United States.

By Minwoo Park (Reuters) - A South Korean startup has developed an AI-powered dog collar that can detect five emotions in canines by monitoring their barks using voice recognition technology. The Petpuls collar can tell pet owners through a smartphone application if their dogs are happy, relaxed, anxious, angry or sad