Speaking exclusively in an interview to CNBC-TV18, Banerjee and Duflo-the 2019 winners of Nobel Prize for Economics along with Michael Kramer, believe the super-rich need to be taxed more. Explaining why they are keen on taxation on real estate, the husband and wife duo said given that value of houses in the metros are 'astronomical', wealth tax is a very logical tax for India to impose, they said.

Duflo said: It is time to introduce wealth tax, higher taxation of top income and distribute this money in such a manner that the very poor can continue to benefit from it and the squeezed middle also finds a way to a productive place in the society, Duflo, the youngest to receive the Nobel Prize for Economics, was quoted as saying in CNBC TV18.

Banerjee, who is an alumnus of the University of Kolkata, Jawaharlal Nehru University (JNU) and Harvard, said since the tax bracket is very small, the government should think of expanding the tax base so that more would come under the tax umbrella, the report said. 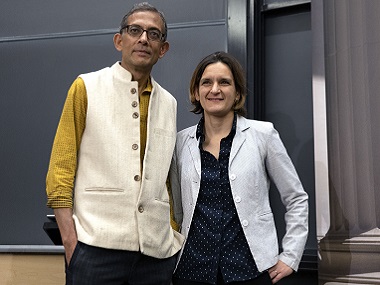 Duflo and Banerjee's “quiet economics” work is solution-oriented with emphasis on causality as opposed to mere economic forecasting.

“Just the value of, for example, the real estate that many people own is so incredibly high, there has been such an incredible windfall from India’s growth and this essentially stays untaxed. If you look at the value of a house in Delhi, Mumbai or Bengaluru, these are astronomical amounts of money. So, I think that that is a very natural way to go especially because the tax base is thin,” the 56-year-old professor at Massachusetts Institute of Technology was quoted as saying in the report.

The Nobel laureates are the first husband and wife duo to win a Nobel Prize for Economics. Duflo and Professor Abhijit Banerjee along with Michael Kramer won the Nobel Prize for their path-breaking work on developmental economics and poverty alleviation.

“What we need to do in the future is to preserve the gains for the poorest, make sure that it continues because they are still extremely poor, and at the same time see how this huge increase in top income quality can be curbed. In the book we do come up definitely in favour of wealth taxation, in favour of estate taxation if it was politically feasible; it seems to be less politically palatable," the report said quoting her.