New Delhi: Union Road Transport and Shipping Minister Nitin Gadkari said on Tuesday said there will be a "revolution" in the country in development of inland waterways and cruise service between Mumbai and the Andaman and Nicobar islands and between Mumbai and Goa will be launched.

Replying to a debate on Central Road Fund (Amendment) Bill, 2017, which was later passed in the house, Gadkari said that average speed of road construction had gone up 28 km per day and it will be 40 km per day by the end of next year.

The bill seeks to allocate 2.5 percent of the cess levied on high speed diesel and petrol under the Central Road Fund Act towards the development and maintenance of national waterways.

Gadkari said a new cruise terminal was being built at cost of Rs 800 crore. 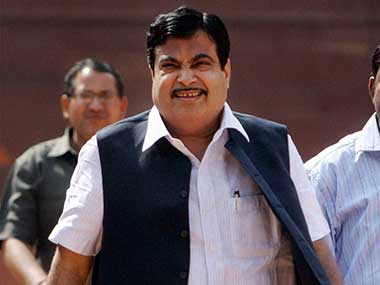 Gadkari said he had urged the Civil Aviation Ministry to frame a law on sea planes in three months or he will bring a legislation on a "flying boat".

He said the country did not have shortage of water but there was problem of management and he will end half of the water disputes during his tenure.

He said that 3000 TMC of Godavari water was going into the sea and even half of it is saved. then water problems of Karanataka, Andhra Pradesh, Telangana and Tamil Nadu will be solved.

The minister said he was surprised that there is no debate in the country over river water not being used and going into the sea but states fighting with each other "for five-10 MLD of water".

Gadkari also said he will complete the Polavaram project.

In an apparent reference to river inter-linking, he said transfer of water from rivers will also lead to creation of waterways.

Gadkari said that automobiles were growing in the country at rate of 22 percent and if vehicles keep growing at this rate, a new lane will have to be added to national highways every three years.

He said the government's first priority is water-based transport as it is cheap, second was rail and the third was roads. "Water transport is needed for innovative transport."

On the Sagarmala project, he said Rs 4 lakh crore in this is for port-rail connectivity, port-road connectivity, modernisation and mechanisation of ports and works worth Rs 80,000 crore have been awarded.

He also said investment proposals were being worked out for development of a port which will enable 1.25 lakh Marathi youth to get employment, while a dredging contract of Rs 1,700 crore for five years has been given for the Ganga.

He also said a 14-lane road is being built in Delhi and efforts made to promote cycling.

Earlier moving the bill for passage, Gadkari said that national waterways provide a cost-effective, logistically-efficient and environment-friendly mode of transport, whose development as a supplementary mode would enable diversion of traffic from the over-congested roads and railways.

He said enactment of the National Waterways Act, 2016 has paved the way for better regulation and development of the 111 national waterways in the country, the infrastructure in terms of jetties, terminals, navigational channels continues to be a challenge.