By Libby George LAGOS (Reuters) - Nigeria's frenetic commercial capital, Lagos, is plunged into darkness several times a day. Then its generators roar, and the lights flood back on. Nigeria is one of the world's largest economies where businesses rely so heavily on diesel-powered generators 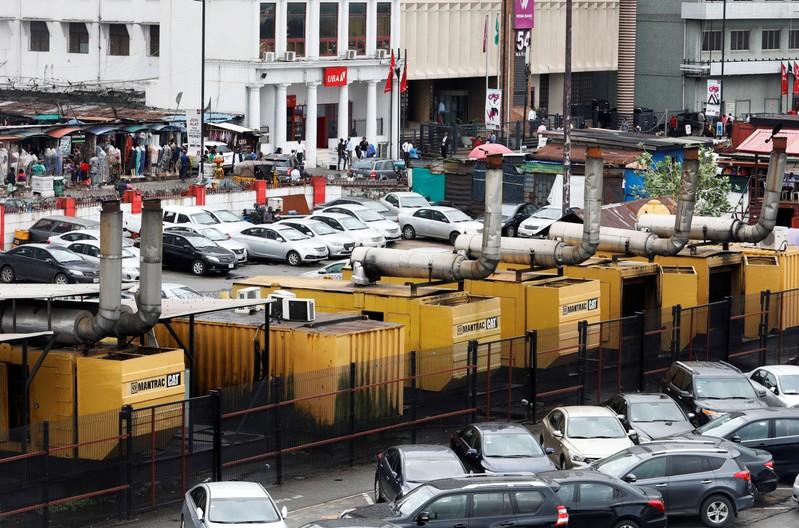 LAGOS (Reuters) - Nigeria's frenetic commercial capital, Lagos, is plunged into darkness several times a day. Then its generators roar, and the lights flood back on.

Nigeria is one of the world's largest economies where businesses rely so heavily on diesel-powered generators.

More than 70% of its firms own or share the units, while government data shows generators provide at least 14 gigawatts of power annually, dwarfing the 4 gigawatts supplied on average by the country's electricity grid.

The machines guzzle cash and spew pollution, but they are reliable in a nation where nearly 80 million people - some 40% of the population - have no access to grid power. Now diesel costs could spike globally, and many businesses are not prepared.

Diesel prices are expected to surge as United Nations rules aimed at cleaning up international shipping come into effect on Jan. 1, with many ships expected to burn distillates instead of dirtier fuel oil.

Slowing economic growth and nascent trade wars could blunt a price spike, and as the shipping industry adapts to the rules, vessels will likely consume less diesel. But in the short term their impact could be profound.

Estimates vary widely, but observers warn that prices could surge by nearly 20%.

Higher costs for operating generators that power the machinery, computer servers and mobile phone towers that run Nigeria's economy could impair growth in gross domestic product, already limping along at 1.92% at a time inflation is at 11%.

With the population growing at 2.6% each year, people are getting poorer.

"In an environment like this, where discretionary spending is very limited, this could have a big impact," said Temi Popoola, West Africa chief executive for investment bank Renaissance Capital.

Nigeria and German engineering group Siemens agreed in July to nearly triple the country's "reliable" power supply to 11,000 megawatts by 2023. But previous such plans have failed.

While many Nigerian household and small business generators are powered by price-capped gasoline, the big generators for larger firms, apartment complexes and more substantial homes can only run on diesel.

"Businesses may struggle to survive, or in the best case scenario, would at least downsize," said Tunde Leye, a Lagos-based analyst with SBM Intelligence. Diesel is the second or third biggest cost for many Nigerian firms, he said.

The oil industry, the Nigerian economy's biggest driver, would not take a big hit as it does not rely on Nigerian consumers being willing to absorb extra costs it has to pass on. As fuel producers in their own right, its firms can also recoup costs more easily.

But other heavyweight industries would feel pain. Bank branches rely on generators, with diesel often accounting for 20-30% of banks' operating expenses, according to Popoola.

Telecommunications companies need them to run their mobile phone towers across the country. Telecoms giant MTN told local media in 2015 that it spends 8 billion naira ($26 million) annually on diesel.

Even bakeries need diesel. At Rehoboth Chops & Confectioneries Ltd, a bakery in the Ogba district of Lagos, giant diesel-powered ovens bake hundreds of loaves of bread. The factory runs 24 hours a day, six-and-a-half days a week.

The lights, mixers and fans that clear the heat are powered by two large diesel generators outside. The ovens run directly on diesel, so they never cut out.

Chief operating officer Abayomi Awe said they use cheaper grid power when they can but rely on generators for around 20 hours per day. Grid power can be down for days.

"It becomes difficult for us to expand if the price of diesel goes up," he said as bakers scrambled to pull finished loaves from steaming ovens. "It might result in some companies, some bakeries like ours, shutting down."

IN CRISIS, AN OPPORTUNITY

Many businesses are already searching for solutions. The Lagos Chamber of Commerce wants electricity prices revised upwards so the grid can attract investment - a politically risky move domestically.

It has also lobbied the government to remove tariffs and taxes on imported solar panels, which stand at 10%.

Solar power provider Starsight Power Utility Ltd said it is working with 70% of Nigerian banks, but that cheap diesel has been one of the biggest hurdles for the development of solar.

"I think an increase in the diesel price would be most welcome for our business," chief executive Tony Carr said. "There is no market penetration because diesel is so cheap."