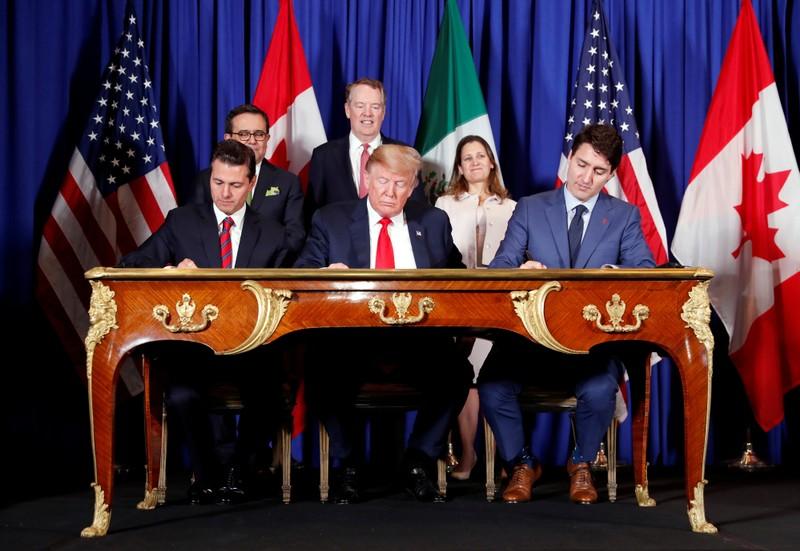 The economic assessment of the U.S.-Mexico-Canada Agreement, released on Thursday, said the trade deal would increase U.S. real gross domestic product by 0.35 percent, or $68.5 billion, on an annual basis and add 176,000 U.S. jobs, while raising U.S. exports.

The report's estimates are for year six of the trade deal, once it is fully implemented.

Auto industry employment would rise by 30,000 jobs for parts and engine production, but U.S. vehicle production would decline in and U.S. vehicle consumption would be reduced by 140,000 units because of higher prices, or 1.25 percent of 2017 sales, the report said.

The report may give ammunition to opponents of the deal. The leaders of the three countries approved the deal last year, but it still must be approved by the U.S. Congress. The deal is a replacement for the more than two-decade-old North American Free Trade Agreement.

The auto industry had been a key focus of the deal for the Trump administration.

The report also found that 1,500 U.S. vehicle manufacturing jobs would be lost and the price of new U.S. vehicles would rise from 0.4 percent for pickup trucks to 1.6 percent for small cars.

Some automakers may decide "not to offer vehicles that would be too expensive to bring into compliance, which would ultimately decrease consumer choice," the report said.

President Donald Trump has touted the deal as boosting the U.S. auto industry employment, which could be a key 2020 campaign issue in some battleground states. In February, he said at his State of the Union address that the deal would "ensure that more cars are proudly stamped with our four beautiful words, 'Made in the USA.'"