By Medha Singh and Devik Jain (Reuters) - The Nasdaq tumbled on Tuesday as investors dumped high-flying technology stocks, while Tesla tracked its worst day in nearly six months after a surprise exclusion from the S&P 500. All eleven major S&P sectors fell in early trading, with declines worsening after news on Friday that SoftBank made significant option purchases during the run-up in U.S. stocks. 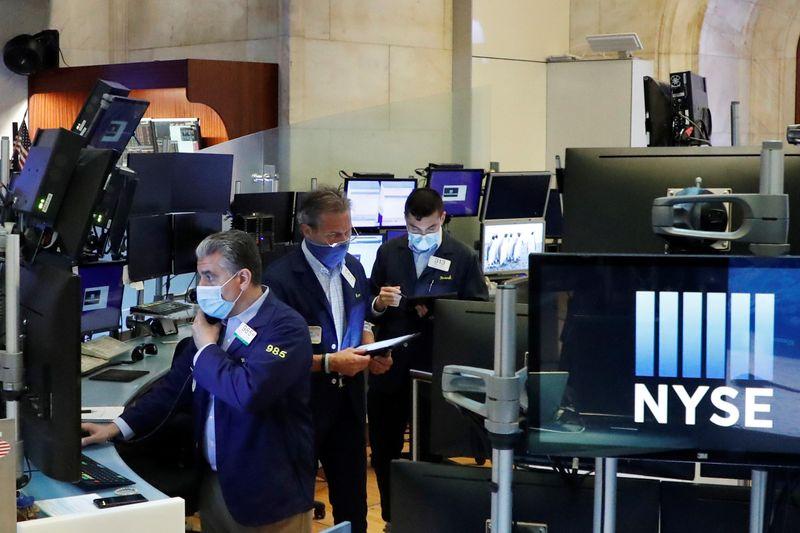 (Reuters) - The Nasdaq tumbled on Tuesday as investors dumped high-flying technology stocks, while Tesla tracked its worst day in nearly six months after a surprise exclusion from the S&P 500.

All eleven major S&P sectors fell in early trading, with declines worsening after news on Friday that SoftBank made significant option purchases during the run-up in U.S. stocks.

Energy, financial and information technology stocks were among the biggest decliners.

"To see a period of carnage is reasonable, considering the massive run up that we have experienced since the early part of the year," said Eric Schiffer, chief executive officer of private equity firm Patriarch Organization in Beverly Hills, California.

"We'll need some time to see whether this is a fundamental shift versus a technical on exhibit, because if it is a shift to fundamentals, that is not a position where you're going to want to necessarily buy a dip."

Media reports of SoftBank's option purchases also reminded investors that market makers might have billions of dollars worth of long positions as hedges against options trades, which will have to be sold as prices fall.

"If you bought a lot of call options in the second quarter, you're doing very well, but that creates a problem for later when you need to unwind these positions," said Ken Peng, Citi Private Bank's head of Asia Investment Strategy.

Wall Street's tech-and-stimulus-led rally halted last week with the Nasdaq falling as much as 9.9% from its record closing high as investors booked profits after a run that boosted the index about 70% from its pandemic-lows.

Tesla plunged another 15.4% to a three-week low after the electric-car maker was excluded from a group of companies being added to the S&P 500.

Value-linked stocks such as banks fell 1.7%, but outperformed a 2.3% decline in the growth-link index.

U.S. President Donald Trump and Democratic rival Joe Biden are set to visit battleground states this week as some opinion polls show the race tightening with less than 60 days to go until the Nov. 3 election.