India faces a structural slowdown and is heading for a certain middle-income trap, said Rathin Roy, member of Prime Minister Narendra Modi’s Economic Advisory Council (PMEAC) and Director of National Institute of Public Finance and Policy in an interview with NDTV on Wednesday.

This prediction, by a member of the government’s top think-tank, has added to the fears that a prolonged slowdown is likely to grip the economy. What exactly the middle income trap Roy is alluding to?

In simple words, this is the story of you and me--the middle-income groups in the country--about how much money we used to spend before to purchase goods and services, how much are we paying now and whether this momentum will continue in the future.

In a broader sense, it is a scenario where middle-income groups in an economy who have been shouldering the domestic consumption story so far by purchasing cars, automobiles and air-conditioners, etc., gradually stop doing so on account of loss of confidence or fear of income loss.

In Roy’s own words, “Since 1991, the economy has been growing not on the basis of exports but on the basis of what the top 100 million of the Indian population wants to consume. Those 100 million or 10 crore Indian consumers who were 'powering' India's growth story", he said, "have started to plateau out.”

He adds: “We are growing at 6.1-6.6 percent. But this consumption slowdown is going to put that under threat. India will grow at 5-6 percent, year-on-year for the next 5-6 years, but a time will come when that will stop."

The warning from a PMEAC member should ring a bell to the policymakers at the Centre and of course to the new government that will be voted to power by the end of this month. Roy is spot on about the demand slump. There are strong evidences for that around.

1. Auto sales are slowing down sharply. In April, Maruti Suzuki India (MSI), and Hyundai Motor India reported a decline in domestic sales in April at 18.7 percent and 10.1 percent respectively. Similarly, the cumulative sales of the top six two-wheeler manufacturers declined to nearly 1.58 million units last month, from 1.88 million units during the same period a year ago. The story isn’t different for tractor sales also. Remember,  these indicate urban, semi-urban and rural demand.

2. FMCG companies are reporting a slowing demand and are largely pessimistic about their near-term prospects. A Kotak Institutional Equities report dated 4 May, talks about a ‘sharp, sudden deterioration in short-term demand narrative.’ 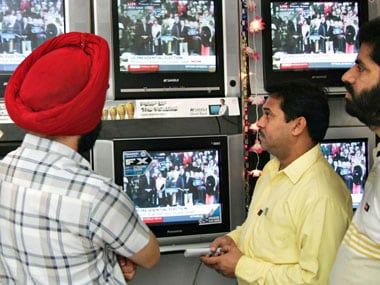 “We see a major shift in tone (for the worse) on short-term demand narrative in the management commentaries of the companies that have reported thus far. When generally-measured managements like HUVR (Hindustan Unilever Ltd) uses the term ‘recession’ in its comments in the post-results presser, it generally isn’t a one-quarter blip,” the brokerage said.  In a separate report, the same brokerage noted that given the sharper-than-expected slowdown in consumer goods, the economy will need fixes firmly focused on structural measures.

3. Nikkei/IHS Markit Services Purchasing Managers' Index (PMI) dropped to 51.0 in April, which is the lowest level since September. The reason for this is the weak output growth and overall weakness in the economy. If one looks at the trend of consumer segments growth, the pattern becomes more visible. Growth in consumer durables and non-durables have fallen sharply from their past high growth days.The following chart is self-explanatory.

4. Retail lending business of banks is another indicator to look at and how it is doing of late. According to RBI data, personal loans increased by 16.4 percent in March 2019 as compared with an increase of 17.8 percent in March 2018. This means that individuals are borrowing less for consumption purposes.

Unfortunately, the problem with this economy is that exports have never been a key factor for India’s growth story all these years . It is a mix of government spending and the domestic consumption that have always played the role of growth-drivers, especially since the 90s.

Now, government spending is unlikely to pick up at least in the next one year on account of fiscal constraints and burden of populist spending political parties have committed to with regard their voters. If consumption too slows down, as Rathin Roy, rightly warns, it is going to be a double whammy for Indian economy.