One look at the first teaser of Naa Peru Surya Naa Illu India and we are already hooked. The upcoming Telugu film starring Allu Arjun and Anu Emmanuel is an intense action drama with Allu Arjun at his rugged best.

The highlight of the latest teaser is definitely Allu Arjun's angry young man look. This definitely seems like an avatar that the actor hasn't taken on before. Arjun plays Surya in the film, a hard hitting soldier with anger management issues. 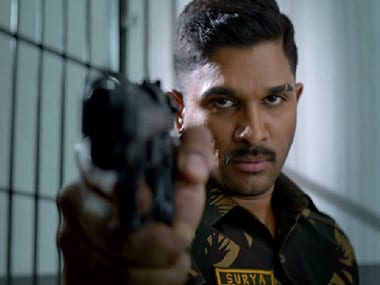 Allu Arjun in a still from the film.

Naa Peru Surya Naa Illu follows the pressurising situations that Surya faces as an adamant soldier and the events that follow.

While Allu Arjun sheds his mass and entertaining image for this one, the film too follows suit with a story that presents the actor away from the usual song, dance and humor routine.

We also can't wait to watch how Anu Emmanuel's role as Arjun''s love interest will impact this soldier. In flashes, it already seems like the two share some sizzling chemistry.

The film has also been abuzz for music by Vishal-Shekhar and the background score.