Mood of Japan manufacturers at its bleakest since 2013, outlook weak - Reuters Tankan

By Tetsushi Kajimoto TOKYO (Reuters) - Japanese manufacturers turned the most pessimistic in 6-1/2 years in November, and the service-sector mood fell to three-year lows, the Reuters Tankan poll showed, as the world's third largest economy was hit by a triple whammy of a global slowdown, natural disasters and an Oct. 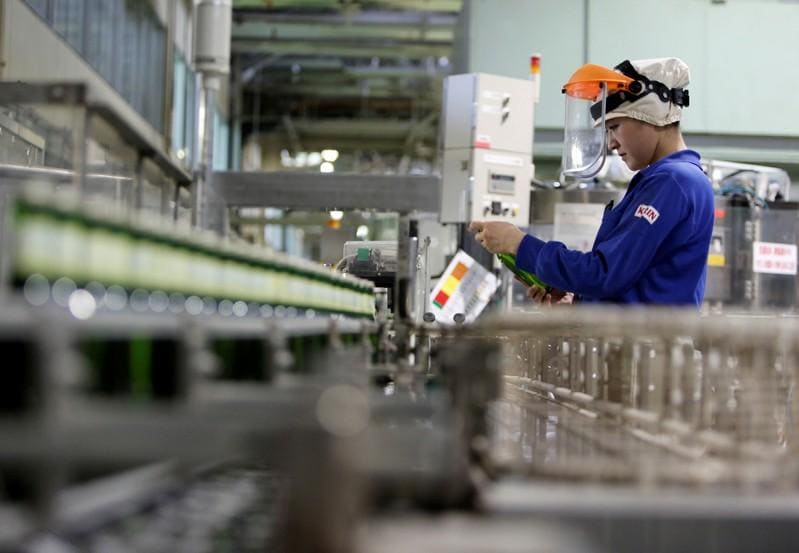 TOKYO (Reuters) - Japanese manufacturers turned the most pessimistic in 6-1/2 years in November, and the service-sector mood fell to three-year lows, the Reuters Tankan poll showed, as the world's third largest economy was hit by a triple whammy of a global slowdown, natural disasters and an Oct. 1 national sales tax hike.

The worsening corporate sentiment may reinforce the need for Prime Minister Shinzo Abe to boost economic stimulus and heaps pressure on the central bank to top up its already massive easing steps.

The monthly poll, which tracks the Bank of Japan's (BOJ) closely watched tankan quarterly survey, found manufacturers' pessimism is expected to ease a bit over the coming three months, and service-sector morale was seen deteriorating further.

The bleak outlook undercuts the BOJ's argument that solid domestic demand would offset external weakness and the impact of the tax hike to 10% from 8% previously. The government has been trying to take the sting off the tax increase with help such as shopping vouchers.

The Reuters Tankan canvassed 503 large- and mid-sized companies, of which 257 firms responded on condition of anonymity during the Oct. 24-Nov. 1 period.

"We cannot forecast demand due to the fallout from the U.S.-China trade war," a manager of a paper/pulp maker wrote, echoing concerns of BOJ Governor Haruhiko Kuroda that the trade war between the world's two largest economies was far from being resolved despite a truce that has eased market jitters recently.

A retailer manager wrote: "We suffered from a pullback in demand after the tax hike, and typhoons and bad weather that hit weekends have dampened consumer sentiment."

The sentiment index for manufacturers stood at minus 9, the lowest reading since March 2013, and down from minus 5 seen the previous month. It is expected to bounce to minus 3 in February.

The service-sector index fell sharply to plus 12 in November from plus 25 in the previous month due to a big drop in sentiment at retailers. The index is expected to fall further to plus 10 in February, a discouraging signal for policymakers worried about a repeat of the deep economic downturn that followed the previous sale tax hike in April 2014.

The BOJ's tankan showed last month big manufacturers' business confidence worsened to a six-year low in the July-September quarter, in a sign the bitter U.S.-China trade war was taking a heavier toll on the export-reliant economy.

As widely expected the central bank kept monetary policy steady last week, but gave the strongest signal to date that it may cut rates in the near future, underscoring its concern that overseas risks could derail a fragile economic recovery.

The Reuters Tankan indexes are calculated by subtracting the percentage of pessimistic respondents from optimistic ones. A negative figure means pessimists outnumber optimists.