By Luc Cohen and David Lawder BUENOS AIRES (Reuters) - The finance ministers for Mexico and Canada on Sunday said they were optimistic about NAFTA talks with the United States, even as trade tensions spurred by U.S. tariffs dominated the G20 meeting of world economic leaders in Argentina. 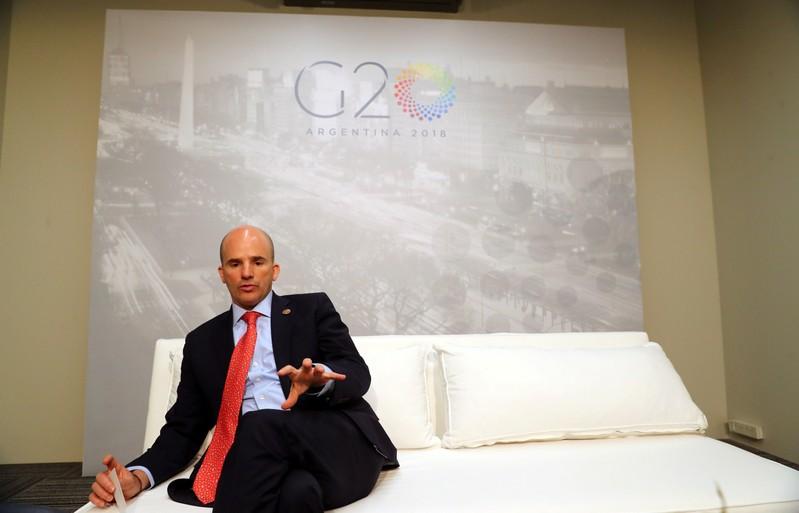 By Luc Cohen and David Lawder

BUENOS AIRES (Reuters) - The finance ministers for Mexico and Canada on Sunday said they were optimistic about NAFTA talks with the United States, even as trade tensions spurred by U.S. tariffs dominated the G20 meeting of world economic leaders in Argentina.

Mexico Finance Minister Jose Antonio Gonzalez Anaya said there were still several chapters of NAFTA that had not yet been closed, but that the renegotiation could be completed before incoming President Andres Manuel Lopez Obrador takes office on Dec. 1 after his landslide victory in this month's election.

"There exists a possibility that we can arrive at some type of arrangement," Gonzalez Anaya told Reuters in an interview, adding that he discussed the talks to modernize the 24-year-old North American Free Trade Agreement during a bilateral meeting with his Canadian counterpart, Finance Minister Bill Morneau.

"It has always existed, and we hope that it stays on track."

The long-running renegotiation, launched by U.S. President Donald Trump last year, has taken on a renewed sense of urgency since Lopez Obrador's victory. The leftist former mayor of Mexico City has said he plans to maintain NAFTA, and his allies have said the transition team will take part in talks.

Trump's tariffs on steel and aluminum imports were still casting a shadow on NAFTA talks, Morneau said. Ire over the measures from the European Union, Japan and others have isolated U.S. Treasury Secretary Steven Mnuchin at the G20 meeting of finance ministers and central bank governors.

Morneau said that he sensed "optimism" from Mnuchin about moving forward on NAFTA, and that Mnuchin had assured him that the administration was committed to a trilateral deal despite Trump's suggestion that the United States could move forward with separate bilateral deals.

"That change in Mexico presents us with the opportunity to restart those discussions. We're going to do that in earnest," Morneau told reporters. We're going to work towards trying to get to an agreement in the time frame that we've got in the next few months."

Morneau said he plans to travel to Mexico next week to meet with the incoming administration. Gonzalez Anaya added that he had a "very good chat" during an informal meeting last week with Carlos Urzua, who Lopez Obrador has tapped for the finance minister's role.

"I have a very good impression of him," Gonzalez Anaya said.