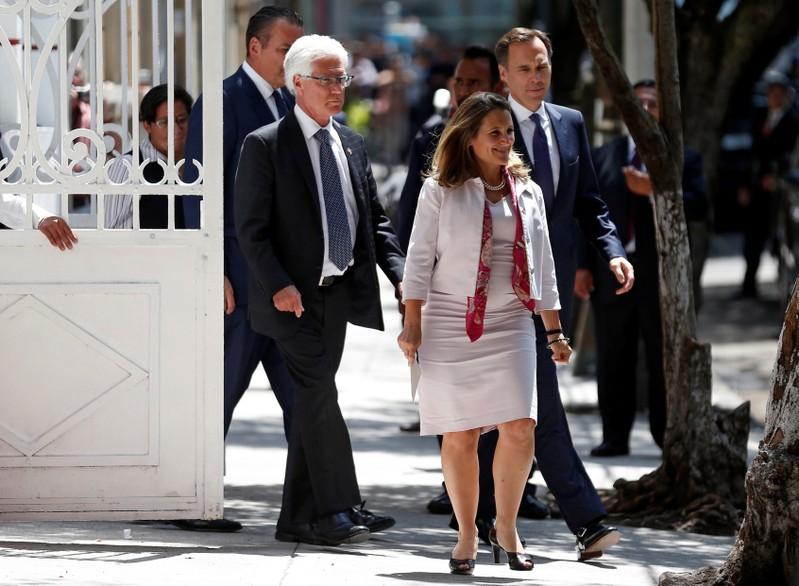 MEXICO CITY (Reuters) - Canadian and Mexican officials insisted on Wednesday that the North American Free Trade Agreement remain a trilateral pact and reiterated their opposition to U.S. calls for a so-called "sunset clause" that could end the deal after five years.

After a meeting in Mexico City, Canadian Foreign Minister Chrystia Freeland and Mexican Economy Minister Ildefonso Guajardo said they remained optimistic about the progress of the negotiations to revamp the 24-year-old trade pact.

Talks began last August but stalled in the run-up to the Mexican presidential election. That was due, at least in part, to U.S. demands for sweeping changes in the auto sector and for a sunset clause, which would put the deal forming one of the world's largest trading blocs up for renewal every five years.

U.S. President Donald Trump has repeatedly threatened to withdraw from the pact if he cannot renegotiate it to better serve his country's interests.

Freeland and Guajardo struck an upbeat tone, with Guajardo saying about two-thirds of the agreement has been ironed out.

In Washington, U.S. Agriculture Secretary Sonny Perdue raised the prospect on Wednesday that NAFTA could be negotiated separately with Canada and Mexico, in order to reach an agreement first with Mexico by September.

Although Mexican officials are heading to Washington this week to meet with their U.S. counterparts, Guajardo stressed that a deal between all three countries remained the goal.

Freeland will not be in Washington this week for the NAFTA talks, a spokesman said.

Freeland said the sunset clause could harm the auto industry, adding that Ottawa opposed a U.S. investigation of auto imports.

Mexican President-elect Andres Manuel Lopez Obrador, who won the nation's July 1 election, has said he wants to accelerate the negotiations. His lead NAFTA negotiator, Jesus Seade, will join the Mexican delegation in Washington this week.

Freeland later held what she described as a good meeting with Obrador and said she had a clear understanding of where he stood on NAFTA. She declined to give details.

"Canada's very clear desire is to move the NAFTA negotiations back into higher gear now that we are past the Mexican election," she told reporters on a conference call.

(Reporting by Noe Torres in Mexico City and David Ljunggren in Ottawa; Writing by Julia Love; editing by Tom Brown and Dan Grebler)