By Aishwarya Venugopal and Hilary Russ (Reuters) - McDonald's Corp missed Wall Street estimates for profit for the first time in two years on Tuesday as more investment to spruce up U.S. restaurants and speed up service weighed on the world's biggest fast food chain, sending its shares down 4% 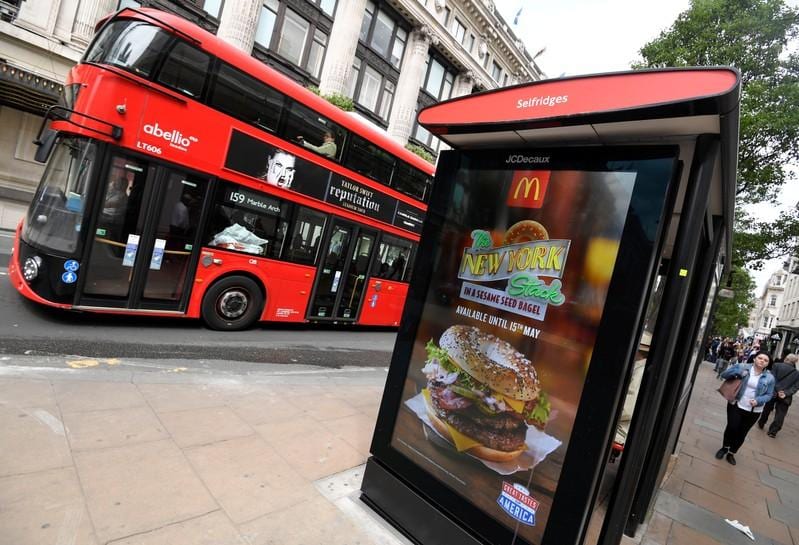 By Aishwarya Venugopal and Hilary Russ

Rival fast-food chains in the United States have challenged its dominance with value meals and new menu items, including plant-based burgers and meat substitutes launched by rivals including Restaurant Brands International Inc's

In the face of declining customer traffic, McDonald's has been remodeling its 14,000 U.S. restaurants to include digital ordering kiosks, mobile ordering as well as pay-and-pickup services, while partnering with app-based delivery services GrubHub Inc

Those investment led to a 2% rise in operating costs to about $3 billion, leading McDonald's to post a smaller-than-expected profit of $2.11 per share versus an average estimate of $2.21, according to IBES data from Refinitiv.

"The world is different than it was in 1955," Chief Executive Officer Steve Easterbrook said during a call with investors.

"We're keenly aware we have to be ahead of these changes, investing, executing and growing with a deep sense of urgency and purpose," he said.

U.S. traffic was negative - an industry-wide trend expected to continue through the end of the year, especially due to weakening economic conditions, according to TDn2K research.

Sales at U.S. restaurants open for at least 13 months rose 4.8% in the third quarter ended Sept. 30, below the 5.17% growth expected by analysts, according to Refinitiv data.

"Our gut tells us that McDonald's was outcompeted in the third quarter by Wendy's and Burger King," Cowen analyst Andrew Charles said in a note.

Despite the U.S. miss, Bernstein analyst Sara Senatore said sales "continue to be among the best in the industry" and that benefits from store renovations should build in future quarters.

Globally, the company reported better-than-expected comparable sales growth of 5.9% on strong performance in markets such as the UK and France.

Interest in plant-based burgers has jumped in North America, and consumers have been waiting to see if McDonald's will expand its test of a Beyond Meat Inc

Easterbook gave no clues other than saying they were interested in such products and wanted to get the flavour and marketing right.

"What we're interested in is really how best to position this, get a sense of the flexitarian customer," he said, referring to people who eat mostly, but not entirely, vegetarian diets.

Total revenue, including both U.S. and overseas operations, rose to $5.43 billion, slightly below analysts' expectations of $5.49 billion.

The company also expects selling, general and administrative expenses for 2019 to rise between 1% to 2% excluding the impact of currency fluctuations.

The service is now available from about 23,000 McDonald's restaurants in over 80 countries. On average, guests spend twice as much on delivery orders as they do on in-store checks, Easterbrook said.

"Delivery remains a big frontier for our business, and we still have a long way to go," he said.

(Reporting by Aishwarya Venugopal in Bengaluru and Hilary Russ in New York; Editing by Anil D'Silva and Lisa Shumaker)