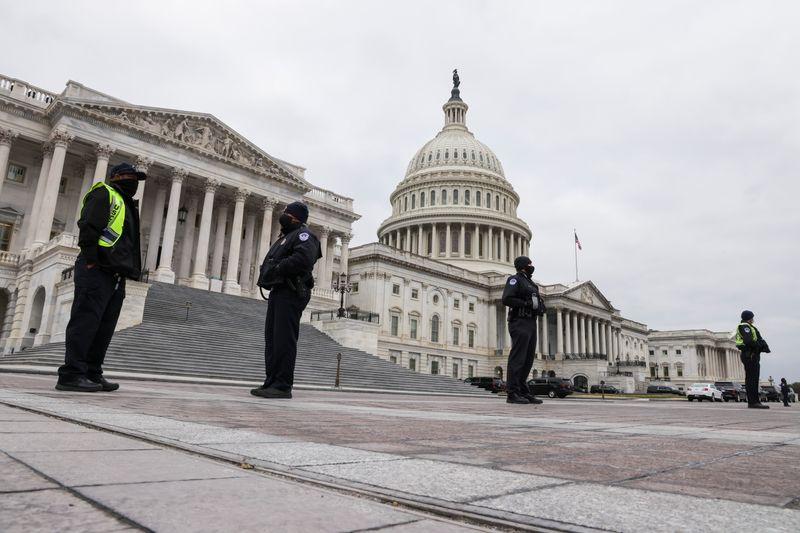 Analysts generally assume a Democrat-controlled Senate - which could usher in increased fiscal spending while raising the chances of tax hikes and tougher regulation - would be a net positive for economic growth globally and thus for most risk assets, but negative for bonds and the dollar as the U.S. budget and trade deficits may widen further.

In stocks, infrastructure and renewable energy sectors rose shortly after the U.S. market opened, while the Nasdaq, home to big tech stocks, slid more than 0.5% as the broad S&P 500 index rose 0.25%.

Democrats need to win both contests to take control of the Senate, while just one win would see Republicans remain in charge and likely lead to legislative gridlock.Raphael Warnock, a Baptist preacher, defeated Republican U.S. Senator Kelly Loeffler, while Jon Ossoff, a documentary filmmaker, maintained a narrow lead over incumbent David Perdue in a race that has not yet been called.

Democratic control of the Senate would give more scope for President-elect Joe Biden to act on his ambitious agenda, which includes new stimulus and infrastructure spending.

It may also pave the way for higher corporate taxes and tighter regulations, policies not typically favored by Wall Street.

"What happened last night was a game-changer," said Phil Orlando, chief equity market strategist at Federated Hermes. "The Blue Wave scenario is now back in place and you will have Senate Majority Leader Chuck Schumer setting the agenda and not Mitch McConnell."

In line with those assumptions, 10-year U.S. bond sold off, with yields topping 1% for the first time in 9-1/2 months. The dollar fell further to its lowest levels since March 2018, adding to a 13% decline since March.

"U.S. 10 year Treasuries have tipped over 1% yield for the first time in nine months – correctly identifying the potential for greater stimulus which could buoy markets even from their current highs and as a result we have seen inflation expectations start to tick up also," said Stuart Clark, portfolio manager at Quilter Investors.

Rising yields outweighed some of those risks in banks with JPMorgan and Bank of America up more than 3% gains at the open, while their European peers rallied hard with the region's banking index up nearly 6%.

The Russell 2000 index - which tracks U.S. small-cap companies - rose 2.2% and was hovering near record highs. Small-cap stocks are generally seen as the first to recover as the U.S. economy pulls out of a recession.

European renewable energy stocks - already up since the U.S. presidential elections in November added to gains, on expectations that a Democratic 'Blue Wave' would unleash a 'green wave' of increasing spending on renewable energy.

Some investors were cautious about the potential for sweeping changes, however.

"While change is in the air for the U.S., changes in US legislation may not be very radical," said Holger Schmieding, chief economist at Berenberg.

"With a 50:50 distribution of seats in the Senate if the Democrats indeed prevail in Georgia, any legislation that does not garner some bipartisan support would have to be backed by the most moderate Democrats in the Senate to become law. Not all Democrats are in favour of what are called “very progressive” policies in the U.S."

Analysts assume a much-needed splurge on infrastructure would be positive for economic growth, jobs and sectors such as construction and transport.

Yet it would have to be funded by more borrowing, a negative for the dollar which is already creaking under the burden of ballooning budget and trade deficits.

"The U.S. basic balance of payments - the current account plus long‑term investment flows - is the most negative in over a decade, suggesting there is no underlying demand for dollars," said Elias Haddad, a senior currency strategist at CBA.

SYDNEY (Reuters) - Australia's Queensland state will enforce a three-day lockdown in Brisbane, the state capital, from Friday evening after a quarantine hotel worker tested positive for the more contagious variant of COVID-19 that has emerged in Britain. "We know that the level of infection is very high in this particular variant. We have to act differently to what we had before

By Eduardo Simões SAO PAULO (Reuters) - A coronavirus vaccine developed by China's Sinovac Biotech was 78% effective in a late-stage Brazilian trial with no severe COVID-19 cases, researchers said on Thursday, although a lack of data details stirred calls for more transparency. The trial results, closely watched by developing countries counting on the vaccine to begin mass inoculations to help end a raging pandemic, was below preliminary findings from Turkish researchers and lacked detailed data provided on U.S. and European vaccines.