By Helen Reid and Zandi Shabalala JOHANNESBURG/LONDON (Reuters) - Companies mining gold in Mali said they were operating as usual while monitoring a political crisis that caused the country's borders to shut and hit their share prices on Wednesday. President Ibrahim Boubacar Keita resigned on Tuesday and dissolved parliament hours after soldiers detained him at gunpoint and seized power in a coup. Barrick Gold , the biggest miner in Mali, said its Loulo-Gounkoto mine complex - which analysts at Scotiabank estimate will account for 9% of the company's production this year - had not been affected. 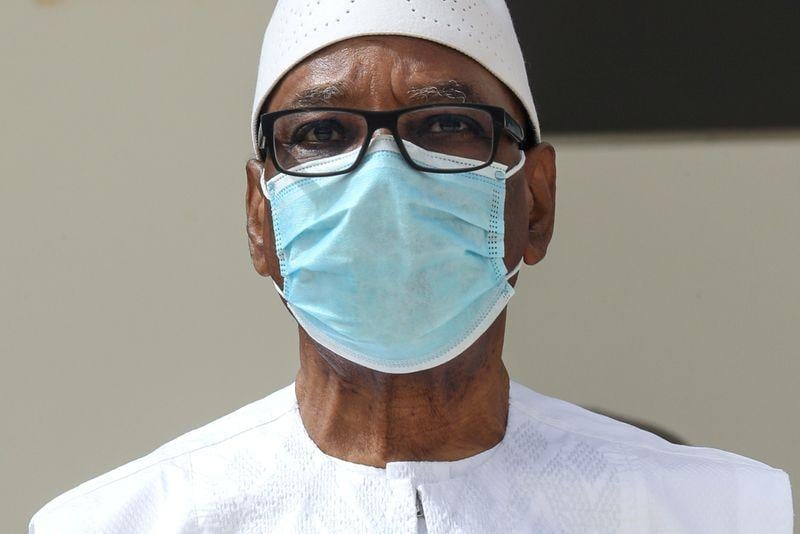 By Helen Reid and Zandi Shabalala

JOHANNESBURG/LONDON (Reuters) - Companies mining gold in Mali said they were operating as usual while monitoring a political crisis that caused the country's borders to shut and hit their share prices on Wednesday.

President Ibrahim Boubacar Keita resigned on Tuesday and dissolved parliament hours after soldiers detained him at gunpoint and seized power in a coup.

"I have always monitored how much exposure I have in West Africa and in each country in the region because there is more risk and this coup reminds you of that," a London-based gold investor said, asking not to be named.

Gold operations in the vast, land-locked nation are located in the south and west, hundreds of kilometres from the capital Bamako where the coup took place. Many miners continued to operate during a 2012 coup.

However, the Economic Community of West African States (ECOWAS) has ordered the closure of land and air borders with Mali.

That complicates logistics for the mining sector, which accounted for 9.7% of Mali's GDP in 2019.

It was not immediately clear whether miners would be able to export their gold - typically flown out of Mali to be refined - while air borders are shut. Mines would also likely be unable to import supplies until borders reopen.

Barrick said Loulo-Gounkoto had "adequate inventory" for its requirements and management had taken steps to secure its supply lines.

B2Gold said its Fekola mine had sufficient supplies to maintain activities through the end of the third quarter "and beyond if needed".

Analysts said future production and investment was in doubt.

"In the longer term, there are more clouds for mining investors as this is the second coup in eight years. It will add to an already very high risk premium that people associate with Mali," Vincent Rouget, analyst at Control Risks Group said.

(Reporting by Helen Reid in Johannesburg and Zandi Shabalala in London; Additional reporting by Jeff Lewis in Toronto; Editing by Barbara Lewis and Mark Potter)