By Noor Zainab Hussain and Simon Jessop (Reuters) - London Stock Exchange Group Plc shares rose more than 15% to a record high on Monday as investors cheered its $27 billion bid to buy financial data firm Refinitiv Holdings Ltd, in a deal that could transform the exchange operator into a global market infrastructure and data giant. Investors and analysts said a deal would make strategic sense and come at an attractive price, while posing less regulatory risk than previous failed tie-ups in the sector. LSE has said negotiations for the deal -- the largest ever attempted by an exchange operator per Refinitiv data -- are at an advanced stage 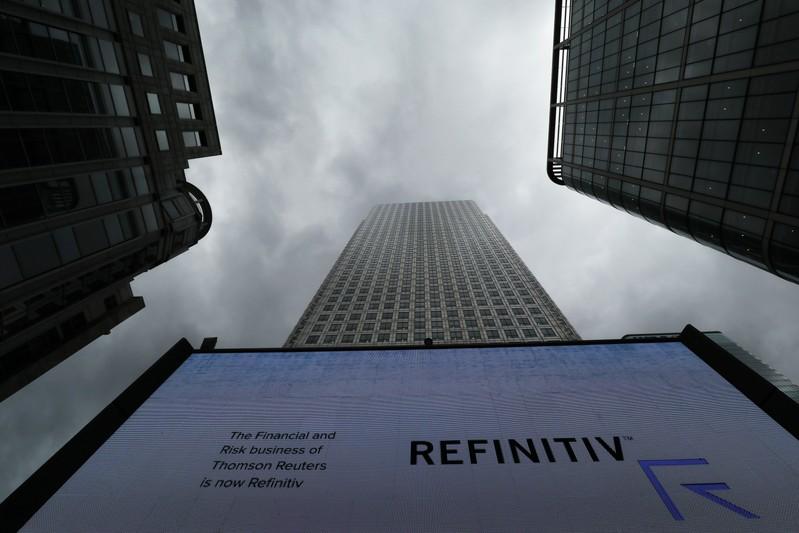 Investors and analysts said a deal would make strategic sense and come at an attractive price, while posing less regulatory risk than previous failed tie-ups in the sector.

LSE has said negotiations for the deal -- the largest ever attempted by an exchange operator per Refinitiv data -- are at an advanced stage. Refinitiv is owned by buyout fund Blackstone Group Inc

"A tie-up would give the combined entity the blend of market data and diagnostics, and news flow and analysis, that could present a material and formidable competitor for Bloomberg, which in recent years has become the preferred provider for many fund managers," said James Bevan, chief investment officer at fund manager CCLA, which has a small stake in LSE.

Spokespeople for Bloomberg, Blackstone and Thomson Reuters all declined to comment. LSE and Refinitiv could not be reached for comment after hours.

Refinitiv had $12.2 billion in debt as of the end of December, as a result of its leveraged buyout by Blackstone, which LSE would assume under the proposed deal.

A merger with Refinitiv would significantly expand LSE's information services business, which the bourse operator has been building as a more stable source of cash flow than its primary transaction-reliant businesses.

Some shareholders expressed concerns about LSE's ability to fully integrate the new companies and maximise potential synergies and cost-savings.

"We are eager to hear more from management as to their quality and ability to integrate them," Mike Fox, head of sustainable investments at RLAM, said in an email.

LSE's last attempt at a transformational deal collapsed in 2017 when European regulators blocked a tie-up with Deutsche Boerse due to concerns about overlaps in their bond-processing businesses.

LSE's proposed deal with Refinitiv is expected to face a long antitrust review, four sources previously told Reuters, although investors and analysts said they did not anticipate any material problems.

The tie-up would create little overlap in trading, although Berenberg analysts said regulators are likely to look at the impact of combining Refinitiv's over-the-counter trading platforms with LSE's clearing business. In the past, regulators have wanted firms to have a choice over whom they clear through.

Investors said regulators may also examine whether the deal would give LSE too much pricing power over exchange data fees, an area that has attracted increasing scrutiny in the Europe and United States.

"Data and the pricing of it: that's where most of the scrutiny would come from," said a top-30 investor in LSE who spoke on the condition of anonymity.