By Nevzat Devranoglu and Ece Toksabay ANKARA (Reuters) - Turkish President Tayyip Erdogan pledged a new economic growth strategy on Wednesday based on stability, lower inflation and international investment, an abrupt shift in rhetorical gears that sparked an rally of up to 4% by the lira. 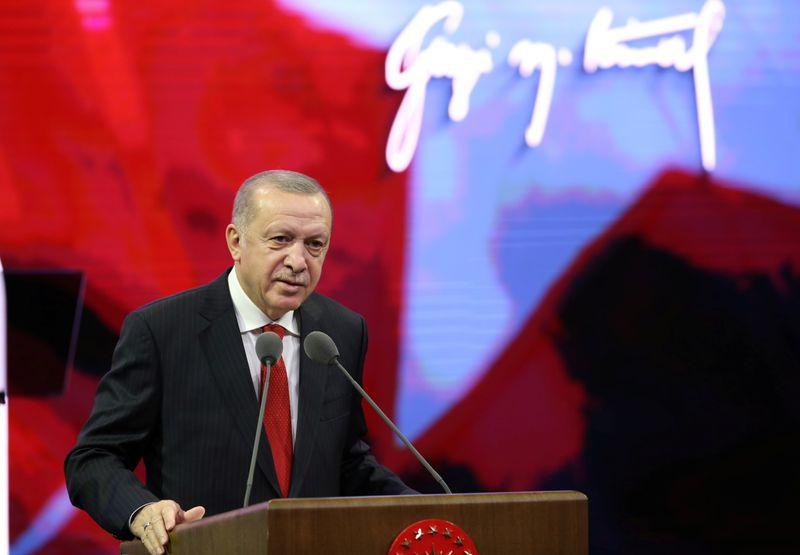 By Nevzat Devranoglu and Ece Toksabay

ANKARA (Reuters) - Turkish President Tayyip Erdogan pledged a new economic growth strategy on Wednesday based on stability, lower inflation and international investment, an abrupt shift in rhetorical gears that sparked an rally of up to 4% by the lira.

Erdogan - who in the past has scapegoated foreign investors for Turkey's economic woes and repeatedly called for lower interest rates - said the strategy would be built on price, monetary and financial stability.

Turkey needed to rebuild both depleted foreign reserves and faith in the beleaguered currency, he said, seeking to burnish Turkey's free-market credibility after its currency dropped to a series of record lows in recent months.

The speech to ruling AK Party lawmakers came days after a surprise leadership overhaul in which the head of the central bank was ousted and the finance minister, Erdogan's son-in-law, stepped down with little immediate explanation.

The comments, including Erdogan's pledge to personally tell international investors about opportunities in Turkey, could mark a shift from a more combative tone since 2018 that in part blamed foreigners for a halving in the value of the lira.

"We are building a growth structure which creates qualified employment, which does not cause inflation and a current account deficit," he said. "We will not refrain from implementing the correct recipe, even if it's bitter."

In response, Citi and Societe Generale recommended bullish bets on the lira

The worst performer in emerging markets this year, the lira struck a record low of 8.58 as recently as Friday. But it has rebounded more than 7% this week after the weekend departures of the two economic policymakers.

In the first concrete step taken under the new leadership, the BDDK regulator on Wednesday relaxed banks' limits on swaps and other trades in a move that lowers barriers to foreign investors who have sharply cut their holdings in recent years.

Foreign holdings of Turkish bonds have dropped to 3% from more than 25% five years ago in response to a 2018 currency crisis and a series of government policies and rules that complicated offshore hedging and shorting.

Last year Turkish state banks starved a London swap market of lira liquidity, drying up trade. Ratings agencies have cited the unorthodox measures, including selling dollar reserves to support the lira, in a series of downgrades.

But on Wednesday a measure of investment risk, five-year credit default swaps, dropped to their lowest since coronavirus-related turbulence hit Turkey in early March.

While Erdogan said the positive atmosphere in recent days was a "signal that we are on the right path," he repeated a frequent assertion that interest rates "are the cause of inflation" and said Turkey would reduce inflation.

That could reinforce concerns about eroded central bank independence before a Nov. 19 meeting at which investors expect Agbal to sharply raise the policy rate from 10.25% to bring inflation down from around 12%.

Erdogan said the bank had a duty to determine policies for price stability and promised to boost financial transparency.

"Over the course of this week evidence has been rapidly accumulating that Turkey is eager to execute a dramatic shift in policy-making back toward a more orthodox framework," Societe Generale's Phoenix Kalen wrote in a note.

But one of Erdogan's ex-allies who now runs a breakaway party, former economy minister Ali Babacan, said earlier that changes of economic personnel would not be enough to address Turkey's troubles while Erdogan remains president.

The banking watchdog raised the limits based on banks' equity on transactions at an array of maturities.

One senior banker who requested anonymity said it reflects a new approach meant to open the door for non-residents to take currency-boosting positions. That should strengthen the efficacy of monetary policy, the banker added.

This year, foreigners have sold $5.8 billion in Turkish stocks and $7.6 billion in debt, while locals have bought $27.4 billion in foreign currency and gold.