Libya's Haftar says he will lift oil blockade, with conditions

TRIPOLI (Reuters) - Eastern Libyan commander Khalifa Haftar announced on Friday he would lift for one month his blockade of oil output and said he had agreed with the rival Tripoli government on 'fair distribution' of energy revenue. A resumption of oil exports after the eight-month blockade would relieve mounting financial pressure for both sides in the Libyan conflict and could remove a major obstacle towards a political settlement, but it is not yet clear if the declared agreement has wider support 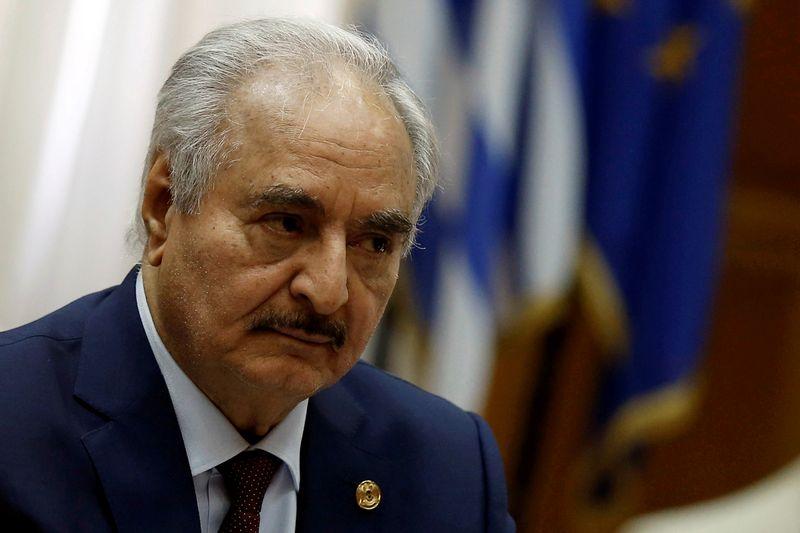 TRIPOLI (Reuters) - Eastern Libyan commander Khalifa Haftar announced on Friday he would lift for one month his blockade of oil output and said he had agreed with the rival Tripoli government on "fair distribution" of energy revenue.

A resumption of oil exports after the eight-month blockade would relieve mounting financial pressure for both sides in the Libyan conflict and could remove a major obstacle towards a political settlement, but it is not yet clear if the declared agreement has wider support.

"We are ready to open oil fields, to secure the future of Libya, for one month," Haftar said in a statement distributed by his spokesman after a brief televised broadcast in which he announced that it had "been decided" to resume oil production.

National Oil Corporation (NOC), which operates Libya's energy sector, also said overnight it would not lift force majeure on exports until the LNA withdrew fighters from its facilities.

Libya and many of its state institutions have been split for years between the internationally recognised Government of National Accord (GNA) in Tripoli and Haftar's Libyan National Army (LNA) in the east.

However, both of those camps have internal fractures that have widened since June when Haftar's 14-month offensive to capture Tripoli collapsed and he was forced to retreat to the central coastal city of Sirte.

In Tripoli, the GNA's deputy prime minister, Ahmed Maiteeg, issued a statement immediately after Haftar's speech also saying it "had been decided" to resume oil production and adding this would involve a new committee to oversee revenue distribution.

The committee would coordinate between the two sides to prepare a budget and transfer funds to cover payments and deal with the public debt, he said.

In a sign of potential pushback against the deal in western Libya, Maiteeg was later forced to cancel a news conference in the city of Misrata by the families of GNA fighters, an eyewitness there said.

Prior to the blockade, Libya was producing around 1.2 million barrels per day, compared with just over 100,000 bpd now.

GNA Prime Minister Fayez al-Sarraj said on Wednesday he planned to step down by the end of October and analysts have said this would lead to political jockeying among other senior figures in Tripoli to succeed him.

However, neither Haftar nor Maiteeg addressed the presence of LNA and allied foreign forces in oil production and export facilities, which NOC has said must be withdrawn to ensure the safety of its staff before it will resume output.

Any sustained return of Libyan exports may weigh on oil prices further, and push other producers to reevaluate their policy on production cuts.

However, NOC has previously said it would take a long time to restore its previous output levels because of damage caused by the long shutdown.

Haftar's LNA is backed in the war by the United Arab Emirates, Russia and Egypt, while Turkish support helped the GNA end the assault on Tripoli this year.

Turkish President Tayyip Erdogan said on Friday he was upset that Sarraj was stepping down and would hold talks on the issue with the GNA later this month.

Turkey and Russia have moved forward in their own talks on Libya towards cementing a ceasefire and finding a political solution, Ankara's foreign minister Mevlut Cavusoglu said on Thursday.

Talks on a political settlement have also advanced in Switzerland with support from the United Nations, and in Morocco between the two rival parliamentary assemblies in east and west Libya.

A spokesman for the U.N.'s Libya mission said it would wait for an announcement by NOC on whether the oil blockade was being lifted.