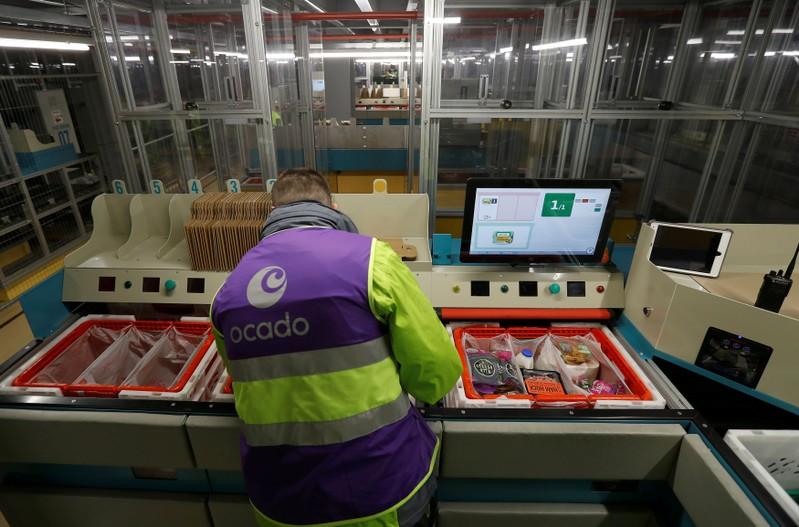 By Paul Sandle and Lisa Baertlein

The U.S. grocery industry is dominated by Walmart Inc and Kroger but has been in upheaval since last summer, when Amazon's $13.7 billion purchase of Whole Foods sent supermarkets scrambling to match the online retailer on home delivery.

The Kroger deal announced on Thursday was Ocado's first in the United States and the British company's fourth major agreement with retailers in six months.

Ocado shares soared as much as 80 percent to an all-time high. Kroger shares were last up 1.6 percent on the deal, with investors reassured by the U.S. company saying the move would not dampen expected earnings for 2018 and 2019.

Kroger Chief Executive Rodney McMullen in a statement called the partnership "transformative" and said it was a step toward the company's goal of giving customers anything, anytime, anywhere.

"The most critical consequence of today's news is the need for other major U.S. players to react," said Jefferies analyst James Grzinic. "The risk is that today's news will accelerate that shift, and on less rational terms."

Britain was one of the first countries to see widespread adoption of online grocery shopping, giving its retailers a head start in developing technology to deal with the challenges of delivering food, especially fresh and frozen goods.

E-commerce already accounts for 7.5 percent of sales of packaged consumer goods in Britain, compared to 1.5 percent in the United States, according to data firm Kantar World Panel, which predicts the latter will rise to 8 percent by 2025.

Ocado's software and hardware automates the processing and packing of online groceries, using hundreds of robots rather than people to pull together orders quickly.

Some analysts and grocers have questioned how well the Ocado model is suited to the U.S. market given its much more disperse population compared to densely populated Britain.

Outside urban areas, they say that it makes more sense to focus on using human workers to pick groceries from existing stores rather than building expensive high-tech warehouses, or to offer curbside pickup for orders, a service available at Walmart and Kroger.

Whole Foods did not immediately respond to requests for comment on the deal.

"The opportunity for a business like Kroger is huge," he said. "They are ambitious, they are capable and together we hope they can transform their industry."

The deal is a setback for Ahold Delhaize, owner of U.S. chains Food Lion, Stop & Shop and Giant, which some analysts had considered a candidate to merge with Kroger to give the retailer access to Ahold's U.S. online grocery delivery service Peapod.

The partnership also raises questions about the fate of third-party delivery company Instacart, which delivers from Kroger stores in 45 metropolitan markets and counts it as a major customer.

If the Ocado partnership gives Kroger the confidence to bring delivery in-house, "that will be disastrous for Instacart," said Neil Saunders, managing director of GlobalData Retail.

Kroger had previously been experimenting with building in-house delivery and had also partnered with Target Corp-owned Shipt.

Kroger will identify at least 20 sites to build new, automated warehouse facilities in the United States, Tatton-Brown said, exceeding all of the centres Ocado has built or is planning to build for all other partnerships.

The two companies are working to identify the first three sites in 2018.

Tatton-Brown said the potential for the partnership goes far beyond the initial 20 centres, with scope for two or three times that in the future.

Cincinnati, Ohio-based Kroger, which has roughly 2,800 stores in 34 mainly Midwest and southern states, in March said it provided delivery from more than 872 stores. It also said it planned to offer curbside pickup from roughly 1,600 stores this year.

Founded in 2000 by three former Goldman Sach's bankers, Ocado has licensed its platform to grocers operating in markets including ICA in Sweden, Sobeys in Canada and Casino in France.

Co-founder and chief executive Tim Steiner saw the value of his stake in the firm rise more than 100 million pounds on Thursday to about 240 million pounds, according to Thomson Reuters data.

The detailed financial terms have yet to be agreed, but Kroger could bring forward some of its payments under the deal, which would reduce Ocado's need for capital. If the retailer fails to hit volume targets it could also lose exclusivity and will have to pay compensation to Ocado.

Before Thursday's deal, Ocado's stock was trading on a heady multiple of 2,250 times its current earnings. The average multiple for the UK grocery retail sector is 17.

The surprise deal and jump in the share price caught out many hedge funds betting the next move would be down.

Shorting of the stock, where shares are borrowed and sold in the hope of buying them back later at a cheaper price to make a profit, was at a five-month high prior to the announcement. More than 56 million Ocado shares were on loan on Tuesday, the most recent data from industry tracker FIS' Astec Analytics showed.