By Martinne Geller and Richa Naidu LONDON/BOCA RATON, Fla. (Reuters) - Mounting troubles at Kraft Heinz, revealed late on Thursday with a triple-punch of bad news, call into question its reliance on cost-cutting as a way to generate profit growth 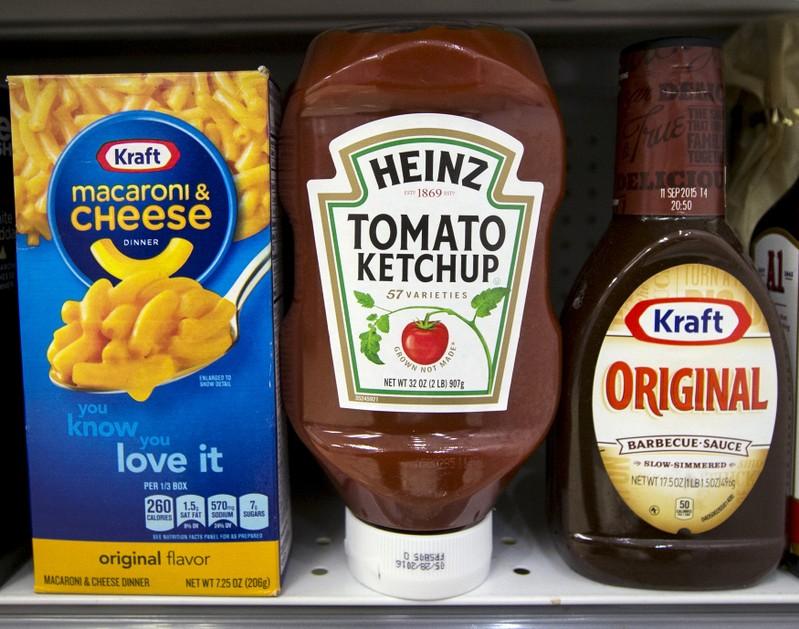 By Martinne Geller and Richa Naidu

LONDON/BOCA RATON, Fla. (Reuters) - Mounting troubles at Kraft Heinz, revealed late on Thursday with a triple-punch of bad news, call into question its reliance on cost-cutting as a way to generate profit growth.

Shares of Kraft Heinz fell 27 percent on Friday to their lowest level since the 2015 merger of the eponymous cheese and ketchup makers that formed the world's fifth-largest food and drinks company.

Late on Thursday, it revealed a $15.4 billion (11.7 billion pounds) write-down tied to its Kraft and Oscar Mayer brands, slashed its dividend by about a third and disclosed an SEC investigation of its procurement accounting practices.

The news validated investors' concerns about the health of the company's brands and its pricing power in an environment of rising commodity and transportation costs and more competition.

Half of the group's market value vanished over the last two years even before Friday, dampening enthusiasm for its backers, private equity firm 3G Capital, and its notorious embrace of a tool called zero-based budgeting (ZBB), used to keep costs low and profit margins high.

A Kraft Heinz spokesman said the company's ZBB efforts continued to drive savings that can be invested in growing the business.

"In 2019, we will increase brand support, go-to-market with a more innovation than ever and invest in talent… and this will be partially funded by ZBB savings," spokesman Michael Mullen said. 3G could not immediately be reached for comment.

ZBB FIT FOR EVERYONE?

Zero-based budgeting is an approach requiring corporate managers to justify each item of spending every year, or even build their budgets from scratch, rather than the more common process of using the prior year's budget as a starting point.

Former U.S. President Jimmy Carter wanted to apply it to federal spending, but it never took off and was abandoned.

It came back into fashion among corporations over the last decade, after 3G Capital used it to great margin effect at brewing giant Anheuser-Busch InBev, whose creation it orchestrated, and then at Kraft Heinz.

Both clocked industry-leading profit margins, and that led more consumer companies to adopt it in recent years as investors' focus shifted to profits from sales, which were slowing amid a slowdown in once-hot emerging markets, new competition from independent challenger brands and weak pricing power due to e-commerce and discounters like Aldi and Lidl.

At the same time, high-profile activist investors set their sights on the sector, prompting many CEOs to squeeze out costs.

"The cuts can be impressive, and that's a big win," said consultants BCG in a report from 2017. They noted, however, that faster growth was not a guaranteed result. "When it's applied clumsily, ZBB can have a demoralizing impact that distracts the organisation from growth and value creation."

Kraft on Thursday missed fourth-quarter earnings estimates and forecast a decline in operating earnings for 2019.

"KHC's EBITDA has not grown over the last five years, its revenue has declined, and its balance sheet has ballooned," said analysts at JP Morgan. "This is not an ideal progression of financial metrics."

Unilever, Mondelez International, Diageo and Kellogg are among companies that have used ZBB, though none has seen as bad results as Kraft's.

"I think it's a black eye for Kraft Heinz management for not implementing it in as a sophisticated way as might be necessary, or maybe they just implemented it too hard, too fast," Investec analyst Eddy Hargreaves said. "I don't think ZBB per se is the problem."

Others said it was not just cost-cuts that led to the write-down of the Kraft and Oscar Mayer brands.

"Are these the kinds of things people are buying these days? Are they fresh? Novel? Healthy? They don’t tick any of the boxes," said Liberum analyst Robert Waldschmidt.

The head of investment at a European consulting firm said ZBB was not the answer for problems ailing Kraft and its packaged food peers, which are suffering as consumers eschew traditional staples like macaroni-and-cheese and bologna for fresher, less-processed or healthier options.

"To catch up with the shift of consumer demand for better-for-you and sustainable food, you have to innovate. And to innovate you simply can't use ZBB," he said.