Kingfisher: Will staff protest bring mighty Mallya to his knees?

In the Kingfisher Airlines drama, is there any development that provides suspense? If there is any, it is going to be the employee-Vijay Mallya showdown at the Grand Prix.

All other developments in the plot are being played to perfection by the dramatis personae as per the pre-written script.

For instance, the licence suspension. It is just formalisation of the partial lockout that the management had declared on 1 October, as explained by CAPA's Kapil Kaul on CNBC TV18.

For the aviation regulator, cancellation was the only way out.

What is in store for the lenders too is pretty much known. There is high probability that public sector banks will be told to write off the Rs 7,500 crore loans given to Kingfisher (read tax payers' money). If this happens, will that be one of the biggest day light robberies in corporate India?

The Way Ahead: "It's over," sums up Neeraj Monga of Veritas Investment Research of Canada, who a year back rang the alarm bells on the death of Kingfisher, in a Mint report. He does not see any future for the airline. So are many other aviation experts. 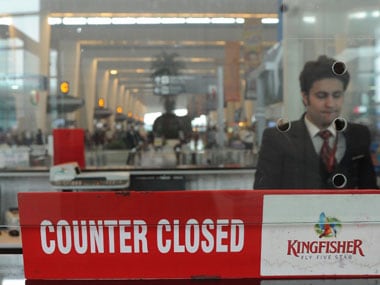 shares in Kingfisher Airlines Ltd dropped 4.8 percent after its licence was suspended on Saturday. AFP

The UB group will recover nothing from the investments it has made in the airline, he says in the report. He sees the recapitalisation requirement for the airline at Rs 4,000 crore.

It is a foregone conclusion that the company is not going to get this massive funding.

So what is it that is not known in the unfolding plot? The fate of the employees.

"Some employees might get absorbed by low-cost carriers like IndiGo, SpiceJet and GoAir, who have increased flights in the winter season," says Amber Dubey, partner and head of aviation at KPMG, in a Business Standard report.

He feels creditors like oil companies, airport companies and service providers might also have to forego their dues.

A Times of India report says, the Airports Authority of India will not allow lessors to repossess Kingfisher's planes unless the airline pays Rs 15 crore per plane. Its dues to the AAI are Rs 300 crore, the report says.

The airline is estimated to have total dues of more than Rs 13,000 crore.

It had accumulated losses of $1.9 billion, according to CAPA.

The only way ahead for Vijay Mallya is to hand over the airline to employees, creditors and lenders, says the Mint report quoting Shakti Lumba, a former vice-president with IndiGo and former head of Air India subsidiary Alliance Air.

The meeting, the showdown: The management is meeting the employees today. Definitely they are not going to discuss any such plan.

And moreover, a section of the employees do not attach any importance to the meeting. They feel the management would not accept their demands, unless cornered, according to a report in the Hindustan Times.

That is the precise reason for their decision to protest at the Greater Noida F1 Grand Prix where they expect Mallya to be present, the report says.

Will such a protest move the great egotist that Vijay Mallya is?

If you think yes, you must be joking.