By Michael Erman and Lisa Girion NEW BRUNSWICK, N.J. (Reuters) - Johnson & Johnson Chief Executive Alex Gorsky on Monday faced questions from plaintiffs lawyers over the timing of his sale of company stock, as he testified for the first time in a jury trial over allegations that the company's Baby Powder causes cancer 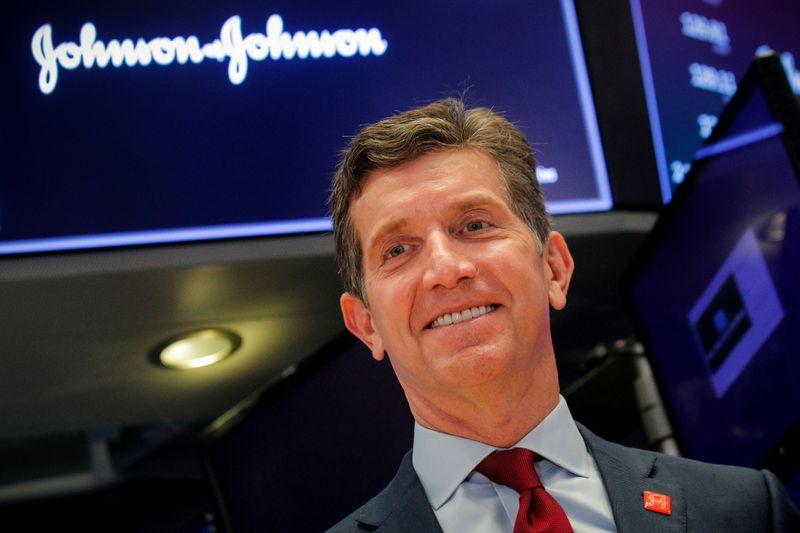 By Michael Erman and Lisa Girion

Gorsky told the jury that he had sold company shares in November 2018, two days after a Reuters reporter contacted the company and summarized in an email her review of documents that showed J&J knew small amounts of asbestos had been found in its talc on occasion since 1971.

Gorsky testified that he was not shown the email from the Reuters reporter at the time of the stock sale.

On Dec. 14, 2018, Reuters published the story that showed J&J had failed to disclose that small amounts of asbestos, a known carcinogen, had sometimes been found in its talc over several decades. After the Reuters report was published, a selloff wiped out more than $40 billion from the company's market value.

At the time, J&J dismissed the Reuters' report as "an absurd conspiracy theory."

"My trade took place at a time when I did not have that kind of knowledge about the article," Gorsky said on Monday. Gorsky testified that he followed all of the appropriate approval processes with the company's board of directors and legal team regarding the sale of company shares after exercising stock options.

J&J faces more than 16,000 lawsuits alleging it sold powders contaminated with asbestos and failed to warn users. It also faces a federal criminal investigation into how forthright it has been about the products' safety.

Filings made by J&J to the U.S. Securities and Exchange Commission show that Gorsky sold $38.6 million of company stock on Nov. 16, two days after Reuters made its findings known to the company. On Monday, Gorsky acknowledged that his net proceeds totalled about $22 million. In response to questions from a lawyer representing J&J, Gorsky reiterated that he had not been told about the Reuters email in advance of the stock sale.

He also acknowledged that he sold less than 10% of his holdings in the company in that transaction and that the shares would be worth more now if he had held onto them.

Gorsky was subpoenaed by plaintiffs' lawyers as a witness in a trial playing out in a courtroom near J&J headquarters. The plaintiffs, three men and one woman, all have mesothelioma, a rare and incurable cancer that they allege was caused by their exposure to asbestos in Baby Powder in infancy during their diapering.

During an earlier liability phase of the trial, a jury awarded $37.2 million in compensatory damages. Now plaintiffs' lawyers are seeking to persuade a new jury that J&J failed to do enough to ensure the purity of its product, and therefore additional punitive damages should be awarded.

"I was told by the experts in their fields that we were using the most appropriate, most up-to-date technology to make sure our talc was safe," Gorsky testified.

In response to a question posed by plaintiffs' lawyers, Gorsky also told the jury he did not read all the internal company documents related to potential asbestos contamination in Baby Powder, including those contained in links in the Reuters report.

"I did not read all the documents, but I would rely on the experts in these fields," Gorsky testified.

J&J had fought against the subpoena, arguing that its CEO had no first-hand knowledge about the safety of its powders and that the case involves corporate conduct that occurred long before he joined the company.

Compelling his testimony "would serve no purpose other than to harass Mr. Gorsky and divert him from his executive responsibilities," J&J said in a motion.

The New Jersey Supreme Court turned down the company's request to suspend the subpoena last week.

In October, J&J disclosed that a contract lab for the U.S. Food and Drug Administration had found asbestos in a bottle of Baby Powder produced in 2018. The company questioned the finding and commissioned tests on samples from the same bottle and talc from the same lot.

Less than two weeks later, J&J announced those tests had found no asbestos, other than some contamination it blamed on an air conditioner in the lab.

Gorsky's journey to the witness stand can be traced to the lead role he played in company efforts to rebut the Reuters report, which prompted plaintiffs lawyers to subpoena his testimony.

In the days following publication, the CEO personally attested to the safety and purity of Johnson’s Baby Powder in a video posted on the company’s website, as well as in an appearance on CNBC’s “Mad Money.”

"We unequivocally believe that our talc, our Baby Powder, does not contain asbestos," Gorsky told the investment show’s host Jim Cramer.