By Daniel Leussink TOKYO (Reuters) - Japan's exports slipped for a ninth straight month in August as international trade tensions ramped up risks for the world's third-largest economy, although the decline was slightly smaller than expected. 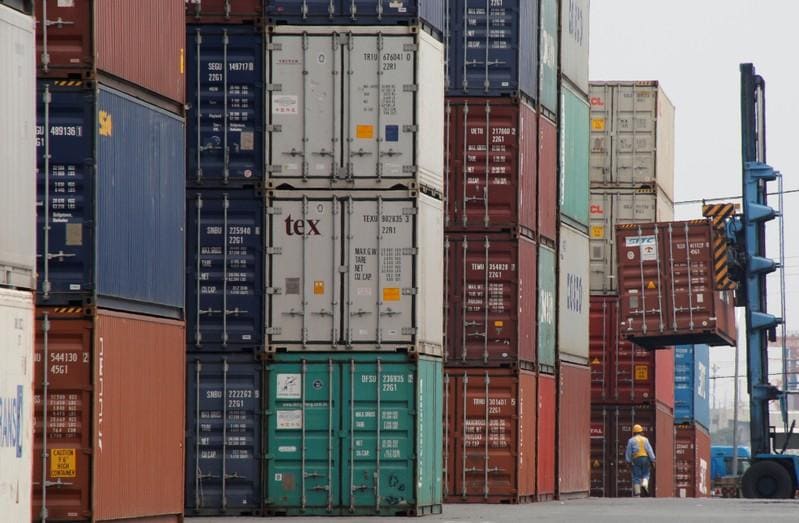 TOKYO (Reuters) - Japan's exports slipped for a ninth straight month in August as international trade tensions ramped up risks for the world's third-largest economy, although the decline was slightly smaller than expected.

The negative reading adds some pressure on the Bank of Japan to expand stimulus at its policy meeting on Thursday to prop up business sentiment and manufacturing activity, which have been hit by global economic weakness.

Exports in August slumped 8.2% from a year earlier, Ministry of Finance data showed on Wednesday, dragged down by autos, car parts and semiconductor production equipment.

The fall was smaller than a 10.9% drop expected by economists but marked the longest run of declines in exports since a 14-month stretch from October 2015 to November 2016.

Fears of a global slump have persisted in recent weeks as uncertainty over the direction of U.S. trade policy cloud the outlook for growth in the United States and export-reliant economies such as Germany, Japan and China.

The nine-month slump in Japan's exports follows revised data that showed the economy grew at a slower-than-expected pace in April-June as business spending was downgraded from initial estimates.

The latest data comes a day before BOJ policymakers on Thursday decide whether to expand an already massive stimulus programme to shield the economy from a possible downturn and protect its growth drivers.

By region, exports to China, Japan's biggest trading partner, shrank 12.1% year-on-year in August, down for the sixth month and driven by declines in shipments of semiconductor manufacturing equipments and car parts.

Shipments to Asia, which account for more than half of Japan's overall exports, dropped 10.9% in the year to August.

Japan's exports to the United States slipped 4.4% in the year to August, their first fall since September last year and driven by declines in exports of 3000cc cars and car parts.

However, imports from the United States dipped 9.2%, causing Japan's trade surplus with the world's biggest economy to rise 3.8% from a year earlier to 472.0 billion yen, the data showed.