By Leika Kihara and Tetsushi Kajimoto TOKYO (Reuters) - Japan's economy grew at the slowest pace in a year in the third quarter as the U.S.-China trade war and soft global demand knocked exports, keeping policymakers under pressure to ramp up fiscal and monetary stimulus to bolster a fragile recovery. Growth in private consumption also cooled from the previous quarter, casting doubt on the Bank of Japan's view that robust domestic demand will offset the impact from intensifying global risks 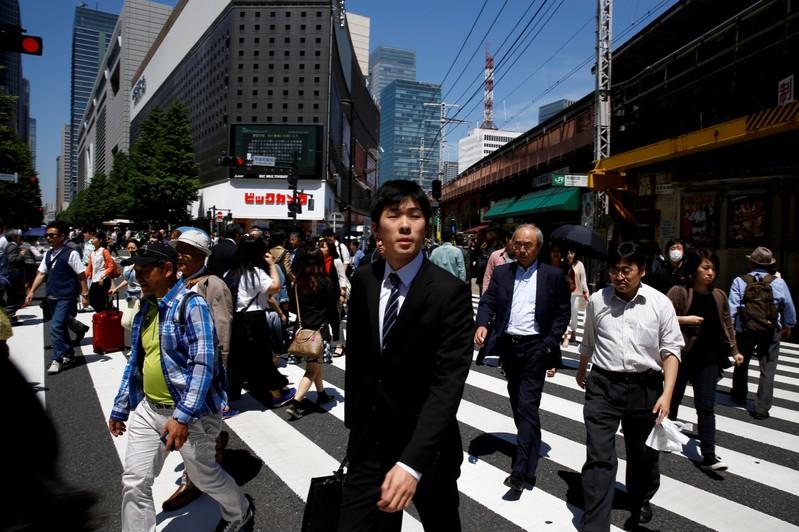 TOKYO (Reuters) - Japan's economy grew at the slowest pace in a year in the third quarter as the U.S.-China trade war and soft global demand knocked exports, keeping policymakers under pressure to ramp up fiscal and monetary stimulus to bolster a fragile recovery.

Growth in private consumption also cooled from the previous quarter, casting doubt on the Bank of Japan's view that robust domestic demand will offset the impact from intensifying global risks.

The world's third-largest economy grew an annualised 0.2% in the third quarter, slowing sharply from a revised 1.8% expansion in April-June, preliminary gross domestic product (GDP) data released by the government showed on Thursday.

It fell well short of a median market forecast for a 0.8% gain and marked the weakest growth since a 2.0% contraction in July-September last year.

"Domestic demand had made up for some of the weakness in external demand, but we can't count on this to continue," said Taro Saito, executive research fellow at NLI Research Institute.

"A contraction in October-December GDP is a done deal. The economy may rebound early next year, but will lack momentum."

The feeble data may heighten calls from lawmakers for the government to boost fiscal spending to support the economy, which many fear will take a hit from a sales tax hike that took effect in October.

Private consumption grew 0.4% in July-September, slowing from a 0.6% increase in the previous quarter, despite stronger demand from households which sought to beat the October tax hike.

Capital spending, a rare bright spot in the economy, rose 0.9% in the third quarter, accelerating from the previous three months. That helped domestic demand add 0.2 percentage point to growth.

But external demand knocked 0.2 percentage point off GDP growth, as exports were hit by the protracted China-U.S. trade war that has upended world supply chains and hurt the global economy.

Markets have been on edge in the past month as the United States and China seek to complete an initial trade deal to de-escalate their bitter tariff row.

U.S. President Donald Trump on Tuesday dangled the prospect of completing the initial deal with China "soon," but has so far offered no new details on the negotiations.

Economy Minister Yasutoshi Nishimura said while Japan's economy is likely to continue recovering moderately, the government will be vigilant to the impact from global risks and the sales tax hike.

"The fundamentals underpinning consumption remains firm. But consumer sentiment is weak, so we need to keep an eye out on developments," he told reporters after the GDP's release.

The data comes as the government plans to compile a package of measures for disaster relief and to protect the economy from heightening global risks.

The BOJ kept monetary policy steady last month but signalled its readiness to maintain or even cut already low interest rates to underpin a fragile recovery.

Prime Minister Shinzo Abe's administration proceeded with a twice-delayed sales tax hike to 10% from 8% in October as part of efforts to fix Japan's tattered finances.

Government officials say the hit to growth from the tax hike will be smaller than the previous increase to 8% from 5% in 2014, because of measures the administration has already taken to ease the impact on households.