By Andrea Shalal WASHINGTON (Reuters) - U.S. and Japanese officials are working hard to reach agreement on a bilateral trade agreement, a senior Japanese official told Reuters on Wednesday, adding he was looking forward to news on the deal in the near future. Three industry sources told Reuters on Tuesday that the United States and Japan were working on a small trade deal involving agriculture and autos that could be agreed by President Donald Trump and Prime Minister Shinzo Abe when they meet in New York in September 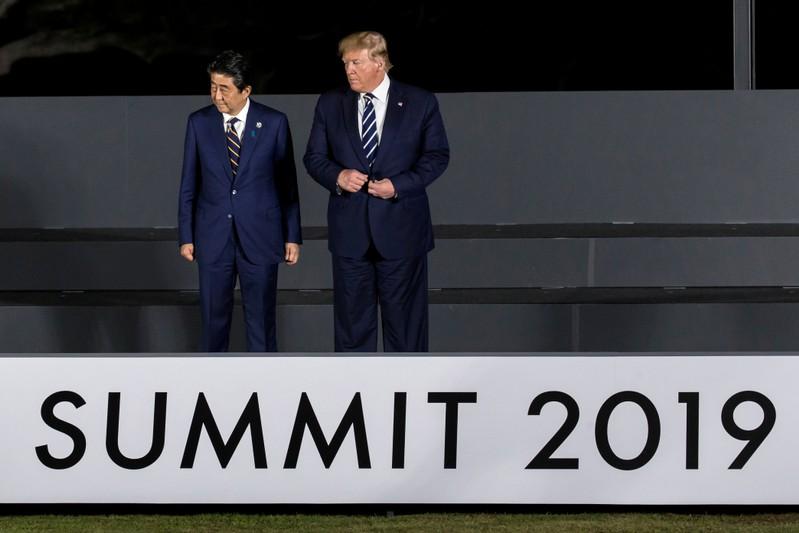 WASHINGTON (Reuters) - U.S. and Japanese officials are working hard to reach agreement on a bilateral trade agreement, a senior Japanese official told Reuters on Wednesday, adding he was looking forward to news on the deal in the near future.

Three industry sources told Reuters on Tuesday that the United States and Japan were working on a small trade deal involving agriculture and autos that could be agreed by President Donald Trump and Prime Minister Shinzo Abe when they meet in New York in September.

Asked about progress in the bilateral trade talks, Koji Tomita, Japan's sherpa to the Group of 20 industrialized countries (G20), said, "When President Trump came to Japan at the end of May, he was talking about doing a deal as soon as possible. Our team is now working pretty hard, so we are looking forward to some news in the near future."

Such a deal would give Abe a win on autos while helping Trump shore up support among farmers, an important constituency ahead of the 2020 presidential election.

Trump and Abe discussed trade in late May and then again in Osaka, Japan, during a Group of 20 meeting last month, but no details of their talks were released.

A source close to the White House said Japan appeared very willing to open up its markets.

The source said the Trump administration was rushing to conclude a deal with Japan to use as leverage in its sputtering negotiations with China on.

"The Chinese are fearful the Japanese will get one first," the source said. "Because it could effectively bring back (the Trans-Pacific Partnership)."

One of Trump's first acts as president was to pull the United States out of the predecessor agreement, the Trans-Pacific Partnership, which had been the centrepiece of former President Barack Obama's strategic pivot to Asia.

Before Trump withdrew the United States in 2017, the TPP was set to become the world's largest free trade deal, covering 40 percent of the global economy. A revival of TPP, even in modified form, would be bad news for China, which had been shut out of the pact.

Trump, angry about Japan's $67.6-billion trade surplus with the United States, has threatened to slap 25% tariffs on imported Japanese cars but delayed those as talks continue.

"The issue is going to be whether or not Japan is going to be willing to make the same kind of commitments it made in the TTP," she told a panel hosted by the Centre for Strategic and International Studies.

She said she was not "particularly optimistic" that Japan would reach an agreement with the United States any time soon.