Japan wants manufacturing back from China, but breaking up supply chains is hard to do

By Naomi Tajitsu, Makiko Yamazaki and Ritsuko Shimizu TOKYO (Reuters) - When Japanese firm Iris Ohyama agreed in April to begin producing much-needed face masks in Japan, it marked a win for Prime Minister Shinzo Abe who wants to bring manufacturing back from China. Spooked by coronavirus-induced factory shutdowns in China, Abe's government has earmarked $2 billion to help companies shift production home. The policy, part of a massive stimulus package to cope with the pandemic, has even been termed by some bureaucrats as a matter of national security 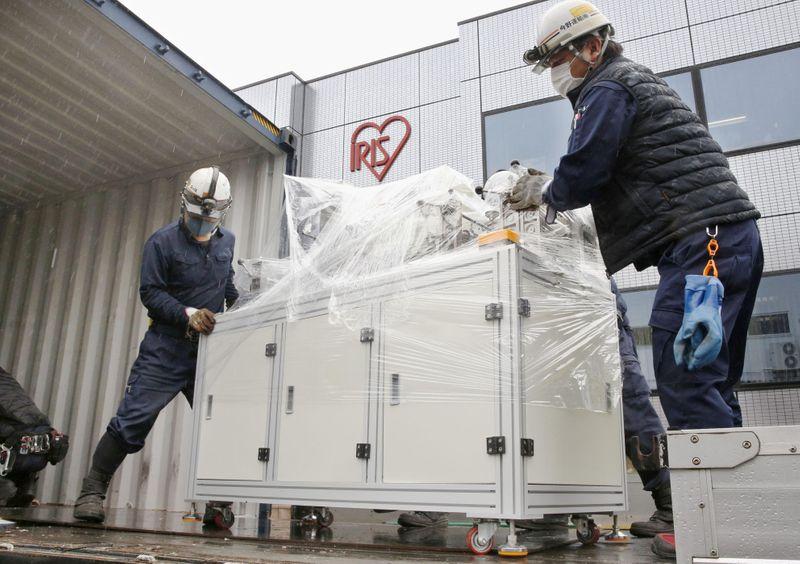 TOKYO (Reuters) - When Japanese firm Iris Ohyama agreed in April to begin producing much-needed face masks in Japan, it marked a win for Prime Minister Shinzo Abe who wants to bring manufacturing back from China.

-induced factory shutdowns in China, Abe's government has earmarked $2 billion to help companies shift production home. The policy, part of a massive stimulus package to cope with the pandemic, has even been termed by some bureaucrats as a matter of national security.

Japanese production of masks, for which domestic demand has skyrocketed, makes sense. But Iris Ohyama, which until this month had only made face masks in China, is so far the only large firm known to be taking advantage of the subsidies.

Many other Japanese firms say shifting output back home is simply impractical and uneconomical. They need to be physically present in China because much of what they are making is ultimately for the Chinese consumer, and to meet the demands of 'just-in-time' production which prioritises short delivery times for efficient manufacturing.

"The parts we make are so big that we need to be near our customers to control our costs," said Chikara Haruta, a spokesman at Yorozu Corp <7294.T>, which makes suspension and other auto components.

"Even if we wanted to, it would be difficult to lower our exposure to China-made parts," an executive at a Japanese automaker told Reuters, declining to be identified as he was not authorised to speak to media.

He added that over the past decade, Chinese suppliers had upped their game and now provide a vast range of quality, low-cost parts.

"The new government incentive is misguided if it only focuses on bringing manufacturing back, while overlooking R&D functions."

Japanese politicians have increasingly fretted over Japan's dependence on China as a production hub.

Since the early 2000s as Chinese labour costs rose, there has been talk of a "China Plus One" strategy — a policy of managing risk by locating plants and facilities in China and one other Asian nation. It gained more traction in 2012 when bilateral tensions flared and many Japanese firms have sought to diversify with operations in Southeast Asia.

The near total shutdown of China's factories in February as the world's No. 2 economy sought to stamp out the coronavirus

The government's 220 billion yen (1.57 billion pounds) allocation is the first time it has offered subsidies for bringing back manufacturing. It is also offering 23.5 billion yen to Japanese firms to strengthen and diversify supply chains in Southeast Asia.

For a graphic on Japanese companies in China, please click https://tmsnrt.rs/2Ubu7aP

Electronics makers too say they would struggle to sever ties with China's supply chains.

Nidec Corp <6594.T>, which produces motors for electronic goods, even said in April it needed to improve its supply chain in China. It was unable to procure supplies of a basic part this year which it had believed was sourced locally but was in fact being shipped from Europe.

"We need to strengthen sourcing capabilities at our Chinese plants. We should be producing these sorts of parts in-house," CEO Shigenobu Nagamori told reporters.

But for many others, China remains the cheaper option.

Display panel and television maker Sharp Corp <6753.T> produces ultra-thin panel cells in Japan, which are shipped to China where backlights, connectors and other parts are added - a process that requires constant manual testing and machinery adjustments.

"The back-end process has long been done in China because it's labour intensive," said a spokesman at Sharp, which was acquired by Taiwan's Foxconn <2317.TW> in 2016.

"It would be expensive to bring it back home."