By Wayne Cole SYDNEY (Reuters) - Asian shares followed Wall Street higher on Wednesday as a bullish outlook from the head of the U.S. central bank buoyed the dollar, lifted Tokyo shares to a one-month top and sent gold to a one-year trough. Japan's Nikkei leapt out of the blocks with a 1 percent gain as a weakening yen promised to fatten exporters' profits. 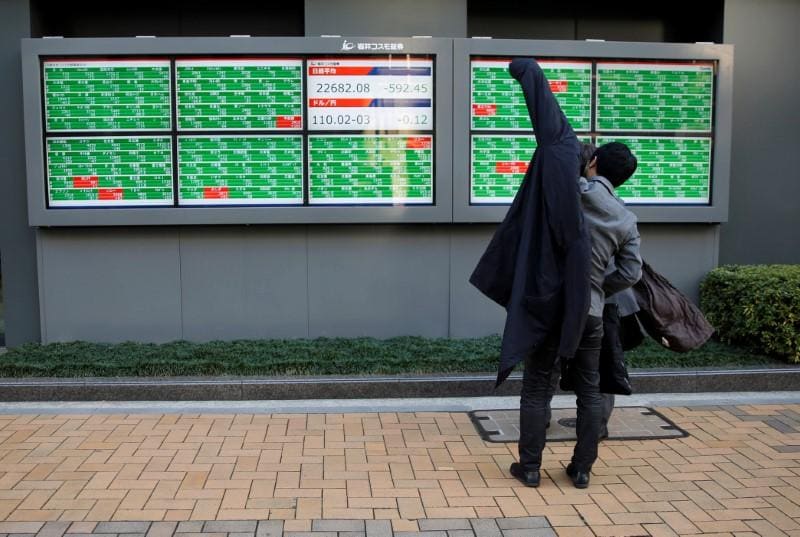 SYDNEY (Reuters) - Asian shares followed Wall Street higher on Wednesday as a bullish outlook from the head of the U.S. central bank buoyed the dollar, lifted Tokyo shares to a one-month top and sent gold to a one-year trough.

Japan's Nikkei <.N225> leapt out of the blocks with a 1 percent gain as a weakening yen promised to fatten exporters' profits.

Federal Reserve Chairman Jerome Powell stuck with an upbeat assessment on the U.S. economy while downplaying the impact of global trade risks on the outlook for rate rises.

"The main risk is that individuals, business, and financial markets have underestimated the desire of Trump to re-orient trade flows and that further steps to implement tariffs will lead to a reduction in confidence, a slowdown in hiring, and a correction in equity markets," he added.

For now, U.S. companies seem to be profiting mightily from tax cuts as the earnings season shifts into high gear. Analysts now see second-quarter S&P 500 earnings growth of 21.2 percent, up from 20.7 percent on July 1.

Against a basket of currencies, the dollar was up at 95.045 <.DXY>, after jumping 0.46 percent overnight. It also climbed to its highest since January against the yen at 113.07

The pound suffered another bout of Brexit jitters after British Prime Minister Theresa May only just cleared the latest parliamentary hurdle to her leaving plans.

Bank of England Governor Mark Carney warned a no-deal Brexit would have "big" economic consequences and force a review of plans to raise interest rates.

The rising U.S. dollar coupled with the prospect of higher U.S. interest rates spelt trouble for gold, which crashed through major chart support to hit a one-year low.